The South Korean government has decided to sell state-owned properties worth more than 16 trillion won ($12.3 billion) over the next five years, including idle and unused land and buildings, to aid widened fiscal deficit from expansionary policy during pandemic period.

Under measures announced by the Finance Minister Choo Kyung-ho Monday during an emergency meeting with economy ministers, the government plans to sell idle and unused state-owned assets worth more than 16 trillion over the next five years to reemploy them for private growth.

The actions are a part of restructuring of the public sector to normalize public finance wrecked by pandemic-related spending.

The government will consider selling idle and unused state-owned assets, starting with general property that can be sold immediately from this month.

The government plans to sell assets being employed for commercial purposes such as rental houses to the private sector. They include assets Korea Asset Management Corporation and Korea Land & Housing Corporation have invested and built for rent income. Nine assets including a commercial building each in Sujin-dong in Seongnam, and Jeongwang-dong in Siheung, both Gyeonggi Province, have been selected for immediate sale, which will be worth 200 billion won in total, according to the finance ministry estimate. 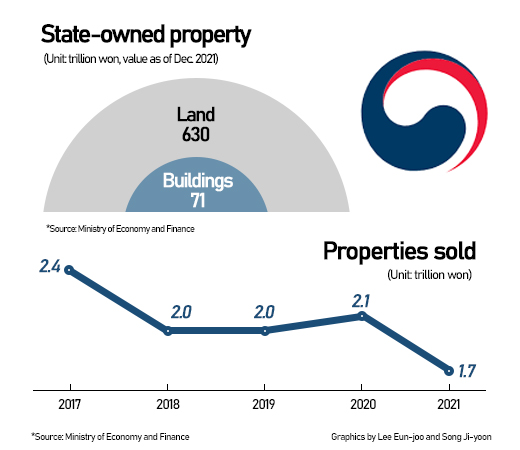 이미지 확대
The government will also immediately sell 14,000 pieces of land worth 500 billion won. They include areas categorized as conservation zone or agricultural development region.

The government will also sell 11 pieces of land worth 90 billion won idled for five years since purchase.

The government will also create a taskforce to study overall administrative property usage and identify idle and unused assets. It plans to come up with a detailed plan for the study this month and launch work next month. In the same study in 2018, the government found 160,000 unused and idle lands and abolished the use of 63,000 pieces of land.

The government expected to raise an annual average of over 3 trillion won in financial income over the next five years by actively selling state-owned assets, up from over 2 trillion won.

The government will also revise the National Property Act enforcement ordinance to enable five years of installment payment instead of current three years to buyers of state-owned assets. Large idle lands that cannot be sold immediately could be broken up to pieces for sale.