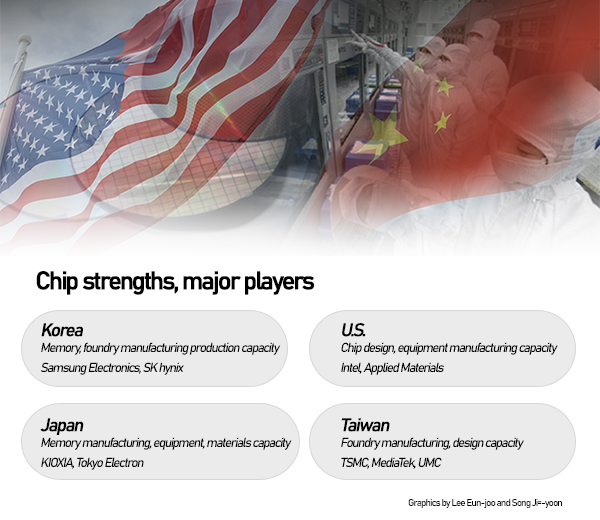 이미지 확대
South Korea will lay down the ground rules for joining the so-called Chip 4 alliance among the U.S., Japan, and Taiwan in a preliminary meeting with the United States early next month as not to damage interests for Korean enterprises with high reliance on the world’s largest chip market.

According to multiple sources from the presidential office, Ministry of Economy and Finance, and Ministry of Trade, Industry and Energy on Sunday, Seoul has agreed to hold a preliminary meeting with Washington early next month in spite of the unofficial deadline set for the end of August to join the Chip 4 to which the other two - Japan and Taiwan - had already complied.

“The foreign ministry will make a request to the U.S. State Department to hold the Chip 4 alliance preliminary meeting early next month through an official diplomatic channel this week,” said a senior government official who asked to be unnamed.

Details such as the period and location of the meeting will be discussed after the Korean government officially delivers its message.

“Beijing should be led to believe the move is not another tech security alliance to isolate China, but to bolster synergy in cross-border chip segment,” said an unnamed senior official from the economy ministry.

The council should be designed as not provoke China as there are rooms for cooperation with China in materials and equipment, he added. 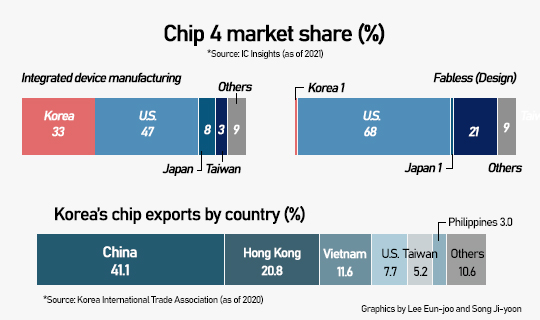 이미지 확대
Seoul readies a series of talks – foreign ministerial and economy ministerial meetings – with Beijing this month, timed with the 30th anniversary of normalization of bilateral ties to mediate between Washington and Beijing before it addresses chip discussions with the U.S.

Seoul will argue the four-country alliance would be on information and technical exchanges and not on industrial alliance.

In the terms it will lay out to Washington, Seoul will reason the four countries should respect the One-China policy and do not mention any export barriers to China. For specifics, it will call for sharing of successful governmental promotions on chip industries, expanded human exchanges, cooperation in advanced chip technologies, and strengthening of supply chain.

The Congress last month passed the Chips and Science Act that enables $52.7 billion subsidy to chip facilities in the U.S. Korea introduced its own version of the Chip Act that ups tax exemption ratio to 20 percent on chip investments.

Samsung Electronics separately has a packaging facility in Suzhou and SK hynix in Chongqing.

Despite the importance of the Chinese market, Korea nevertheless cannot resist joining the Chip 4 as the U.S. holds key original technologies and dominates the chip design and equipment market.