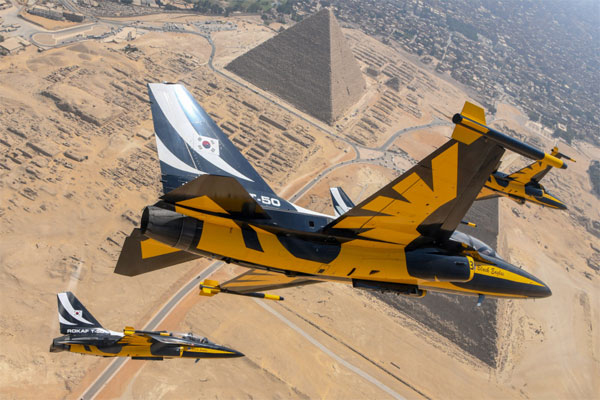 Upon the success of clinching a milestone $14.5 billion arms deal with Poland, South Korea is pushing harder on overseas defense campaign as its “Black Eagles” on Wednesday became the first non-Egyptian flight demonstration team to fly over pyramids.

The Black Eagles performed alongside the Egyptian aerobatic team Silver Stars above the Giza pyramids at the Pyramids Air Show 2022 on Wednesday. The demonstration was jointly planned by the Korea Aerospace Industries (KAI) and the Egyptian Air Force (EAF).

The air show was carried out at a time when Seoul and Cairo are in negotiations to employ Korean fighter jet FA-50s.

Since the $1.7 billion contract for K9 howitzers in February this year, Korea and Egypt have been discussing the joint manufacturing of Korea-made FA-50 light-attack jets. Egypt is currently considering replacing its older aircraft in phases with an aim to select an advanced trainer aircraft model by 2023.

The two countries are negotiating to cooperate not only for manufacturing but also for maintenance, repair and overhaul (MRO), an integral part of aircraft maintenance.

The FA-50 is a light combat aircraft manufactured by the KAI and is the operational version of the T-50 Golden Eagle advanced jet trainer.

“I am confident that we will be able to export 1,000 FA-50s within the next 10 years,” said Lee Bong-Geun, the managing director of the KAI Export Innovation Center. “We plan to work with Eygpt to develop a version of the FA-50 suitable for training in the African region.”

By Kim Sung-hoon and Susan Lee