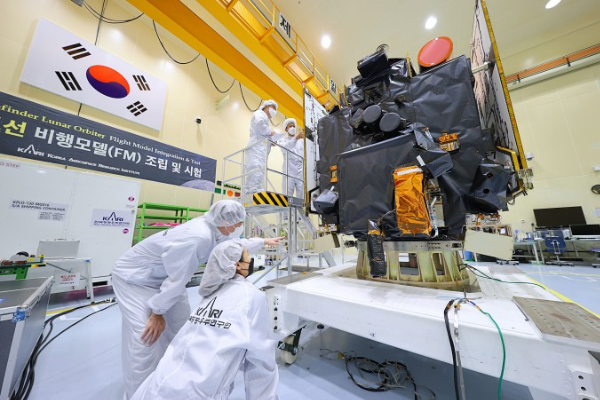 According to the Ministry of Science and ICT on Thursday, Danuri – which means “enjoy the moon” in Korean – is scheduled for blast off at 8:08 a.m. on Friday in Korean time at Cape Canaveral in Florida after a delay from Tuesday. The trip is set to go on favorable climate forecast.

Danuri was placed on Space X’s Falcon 9 rocket and moved to the launch site and was raised vertical at around 10 a.m. on Thursday.

“I believe that Danuri will be able to successfully carry out its mission as the Falcon 9 has a 98.8 percent success rate,” said Lee Sang-ryul, director of Korea Aerospace Research Institute (KARI).

Around 40 minutes after its launch, when it is 1,656 km away from the surface of the Earth, Danuri will detach from the rocket. After detaching from the rocket, Danuri will activate the computer’s automatic program and launch on the planned ballistic transition trajectory called the “Ballistic Lunar Transfer, or BLT.” BLTs - which are a type of low-energy transfer - will save Danuri 25 percent of fuel but the spacecraft will take around four and a half months to enter orbit around the moon.

Danuri is set to enter the moon’s orbit on Dec. 16 and cruise above the moon’s surface at an altitude of 100 km on December 31. It will then carry out its mission starting February next year until around December.

Danuri will carry five payloads developed by Korean universities and one by NASA. The five domestic payloads include the Lunar Terrain Imager (LUTI), a Wide-Angle Polarimetric Camera (PolCam), a Magnetometer (KMAG), a Gamma-Ray Spectrometer (KGRS), and the Disruption Tolerant Network Experiment Payload (DTNPL). The payload funded by NASA is the highly sensitive ShadowCam which will be used to collect high-resolution images of dark craters to determine whether there is a presence of ice deposits on the moon’s surface.

The Danuri will also be the first lunar orbiter to carry a Delay/Disruption Tolerant Network (DTN) which will be used to send files such as the Electronics and Telecommunications Research Institute (ETRI) promotion video, DTN technology explainer video, and K-pop megastar BTS’s song “Dynamite” to Earth in order to test internet connection in space.

By Lee Sae-bom and Susan Lee