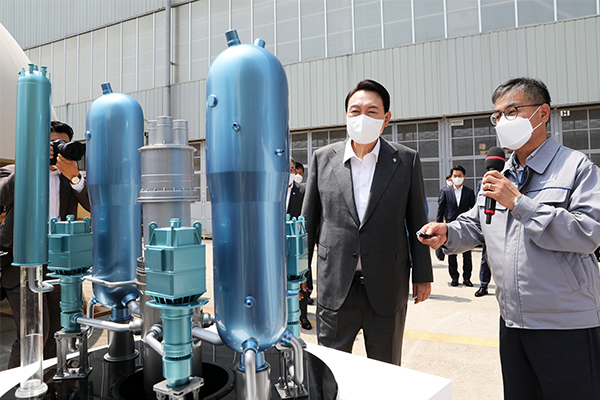 Calling the policy to phase out of nuclear power under the last government “foolish”, South Korean President Yoon Suk-yeol on Wednesday vowed to restore the country’s reactor supremacy through multibillion-dollar procurements annually and R&D investment for the goal of exporting 10 reactors by 2030.

He reconfirmed reversal of reactor phase-out policy by visiting a reactor factory site of Doosan Enerbility, formerly Doosan Heavy Industries that used to monopolize in reactor equipment, in Changwon, South Gyeongsang, on Wednesday.

Yoon ordered expedition in the construction of Shin Hanul No. 3 and No. 4 nuclear reactors that had been stopped under the last government to save small and mid-size suppliers from going under due to lack of work.

Under the policy to wean off nuclear power incrementally, the previous government had retired aged rectors ahead of their legal age, stopped constructions, and cancelled new projects.

The Ministry of Trade, Industry and Energy and the Ministry of SMEs and Startups plan to place 92.5 billion won worth of orders in equipment and R&D projects this year to help restore the habitat. Of the total, 80.5 billion won will go to resume construction of Shin Hanul reactors and secure nuclear reserves.

The U-turn in reactor policy comes amid increasing energy weaponization from fuel price jump and shortage due to the Russia-Ukraine war and global carbon reduction endeavors.

The industry and energy ministry plans to procure work of more than 1 trillion won in the nuclear sector through 2025. After long-term energy supply outline is revised, construction of Shin Hanul reactors will be pursued in full force. Once construction resumes, 6.3 trillion won worth of orders will be placed to suppliers.

“We will inject 1 trillion won this year to resolve difficulties faced by the nuclear industry and enhance competitiveness,” said an unnamed industry ministry official. 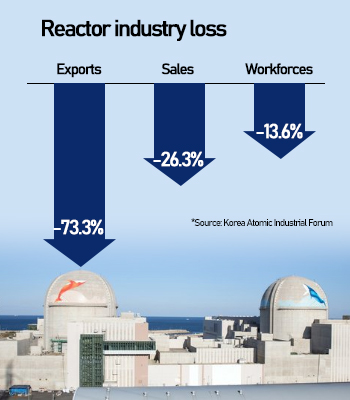 이미지 확대
The government will provide 380 billion won this year to the industry through policy funds and supplier loans to boost competitiveness and offer customized support to small and mid-size enterprises.

“We will offer more than 200 billion won in liquidity and sharply up investment-type support from 12 billion won to 30 billion won,” said an unnamed official from the SMEs ministry.

The government will also spend 3 trillion won for R&D support to improve competitiveness in the longer run. It will provide 670 billion won in R&D funds this year. It plans to spend more than 3 trillion won by 2025 on R&D to produce customized products for overseas demand and localize key equipment and materials after analyzing nuclear value chain by the end of this year.

To enhance management of radioactive waste from nuclear operations, the government plans to nurture professionals by establishing a related graduate school next year and training 20 experts every year, said an unnamed official from the trade ministry.

The government will launch separate research to create hydrogen, a clean energy from nuclear and small modular reactor (SMR). It will invest 399.2 billion won by 2028 to develop and commercialize indigenous SMRs and carry out research to produce hydrogen from nuclear.

Exporting Korean nuclear technology will receive full government attention for the goal of winning global orders for 10 reactors by 2030. The government is currently working to draw the projects in in the Czech Republic and Poland.

“We plan to revive the nuclear ecosystem on the verge of dying out and create a virtuous circle that leads to global competitiveness improvement and export expansion to become a nuclear powerhouse,” said an unnamed official from the presidential office.

The industry ministry will form a nuclear export strategy committee to strategically nurture nuclear export industry that will oversee a wide range of issues from large-scale financing, defense, and economic partnership.