Shortest air route between Seoul and Tokyo reopens from next week 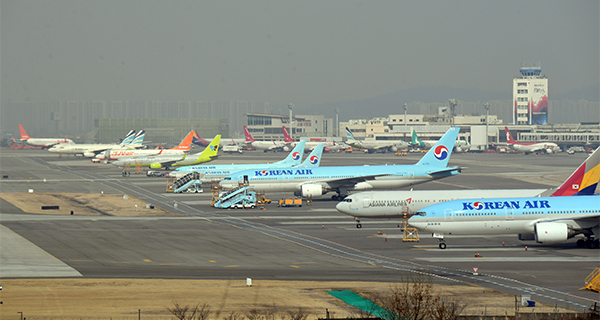 The shortest flight route between the two capitals of South Korea and Japan will be reopened next week after 27 months of closure due to the virus situation.

The two governments have reached an agreement to run the Gimpo-Haneda route for eight times a week from June 29, the Ministry of Land, Infrastructure and Transportation, the Ministry of Foreign Affairs, and the Ministry of Culture, Sports and Tourism announced Wednesday.

Korea and Japan will seek for further addition to the flight schedule from next month, considering demand and readiness by airliners.

The Gimpo-Haneda route that links Seoul and Tokyo, the capital cities of Korea and Japan since the launch in 2003, represents the cultural exchange between the two countries. On the back of a strong demand for business trips, nearly 98 percent of all seats available on the route were occupied during peak season before the virus outbreak, with regular flights operated 21 times a week in 2019.

The Ministry of Land, Infrastructure and Transportation and the Ministry of Foreign Affairs discussed with their Japanese counterparts, and aviation authorities of the two countries reached a settlement over the route reopen on Tuesday.

The two countries have lifted quarantine measures for overseas arrivals.

Tokyo has restarted visa procedures to allow short-term visits for traveling in June the ban in April 2020.

In celebration of the reopening, the Ministry of Culture, Sports and Tourism will install a booth to welcome foreign travelers’ arrival to the country at Gimpo International Airport and hold tourism fair to lure more visitors in major Japanese cities in the second half.