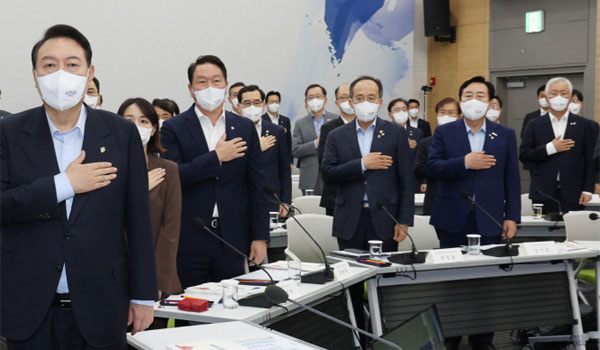 South Korean President Yoon Suk-yeol on Thursday reiterated the government’s commitment to driving economic growth through bold investments from the private sector and asked for close collaboration between the government and businesses in times of crisis.

“The government and businesses are not apart but one,” Yoon was quoted as saying during a closed meeting with private sector representatives at Pangyo Techno Valley in Seongnam, Gyeonggi Province, on Thursday. “The government will drastically improve systems and regulations that dispirits entrepreneurship.”

The meeting took place before his government announced its first economic policy directions, 38 days after Yoon took office on May 10.

Unlike in the past when such business and economic meetings presided over by the president invited limited participants to business lobby group heads and economy-related ministers, Yoon this time invited experts in diverse fields from startups, academia, and private research institutes.

The presidential office also held the latest meeting in Pangyo, outside of the presidential office, as the city represents the successful work of state-private sector collaboration. Pangyo is a technology hub known as Korea’s Silicon Valley, in which the country’s internet giants and promising tech startups have their head offices.

According to an unnamed official from the presidential office, Yoon said that he would like to make policies that reflects ideas from the private sector and asked them to get in touch for casual brown bag meetings in the evening to discuss economic issues in the future.

“The government should focus its capacity so that the private sector creates more jobs and the people are able to seek new opportunities,” Yoon said while pledging to seek economic system reform led by private sector and market.

“Bio, chips, and battery sectors all need data,” he said. “The government should think about measures to collect and share future business data.”