State utility Korea Electric Power Corporation (KEPCO) is pressing the government for a hike in electricity fees in the third quarter despite inflationary impact to contain its snowballing losses and debt from surging fuel costs.

KEPCO on Thursday submits its rate outline for the coming quarter to the Ministry of Trade, Industry and Energy and the Ministry of Economy and Finance where it would argue strongly for a hike in electricity charges in spite of inflationary concern.

Electricity rates are assessed by adding basic fuel cost, climate environment fee, and fuel cost adjustment rate. KEPCO is expected to propose minimum hike of 3 won ($0.002) per kilowatt hour (kWh) in the fuel cost adjustment rate for the third quarter from the previous quarter, while demanding to up the on-quarter increase ceiling to 5 won from current 3 won for faster increases after protracted freeze in rates.

KEPCO argues for hike in fuel cost adjustment rate in the third quarter to better reflect to spike in fuel purchase cost.

KEPCO logged 7.7 trillion won in losses from first-quarter operation, which is 2 trillion won more than full-year 5.8 trillion won losses in 2021. KEPCO could face the red stretch to as much as 30 trillion won by the year-end if it cannot sharply raise electricity charges. 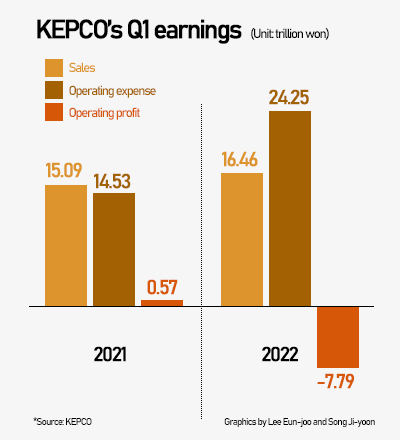 이미지 확대
The government and ruling party are agreeing to the need for a hike in electricity bills in fear or bigger bailout if it leaves KEPCO’s worsening financial state unattended.

“The more we put off KEPCO loss issue the greater burden will be go to future generation,” said Park Il-joon, second vice industry minister, on Wednesday.

He told reporters in a luncheon that the range in electricity fee hike is important to resolve issues at KEPCO and that it wouldn’t help much if the rate is increased by 1 to 3 won per kWh.

The industry ministry is calling for a comprehensive measure to resolve KEPCO losses. Together with rigorous restructuring through asset sale, the government will study raising the ceiling for its bond issues as well as the cap on flexible electricity billing system.

“The government can constrain [electricity and public bill prices] as not to worsen inflation, but such move can damage free market function,” said Kwon Seong-dong, floor leader of People Power Party. “A hike in electricity prices is inevitable.”