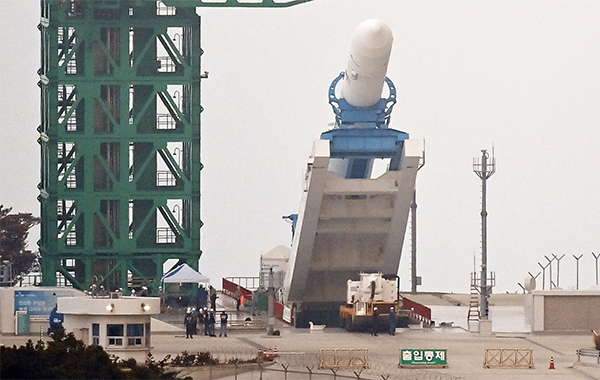 The launch of South Korea’s homegrown rocket Nuri, or the Korean Satellite Launch Vehicle II (KSLV-II), has been delayed indefinitely from its planned date of Thursday due to a sensor problem found during the last phase of preparations on Wednesday.

The Korea Aerospace Research Institute (KARI) said it found that one sensor failed to point to a correct level of oxidizer in the tank, but it was difficult to identify the source with the rocket being held upright, and thus it will be transported to an assembly site for inspection, said Ko Jeong-hwan, head of KARI’s KSLV-II R&D Directorate during a press conference.

Nuri was transported to a launch pad at the Naro Space Center in Goheung, South Jeolla Province Wednesday morning and the three-stage rocket was installed by noon for Thursday’s blast-off at 4 p.m. after a one-day delay due to windy weather in the region.

When Nuri will be launched remains unclear as authorities should determine the exact cause of error, whether the problem originated from the sensor or a cable that connects the sensor to the cable box. If the launch fails within the scheduled contingency date of June 16 to 23, the government should notify the international community of the new launch dates, which will take more time.

Nuri successfully flew to a target altitude of 700 kilometers in a first attempt in October, but failed to put a dummy satellite into orbit due to an earlier-than-expected combustion of its third stage engine. Later it was found that the oxidizer tank caused a problem in the first launch, where an anchor to the helium tank was loosened due to vibration and buoyancy in the oxidizer tank.

The second space rocket came with reinforcement in the lower fixture of the helium tank and a thicker oxidizer tank cover.

By Jung Hee-young and Minu Kim