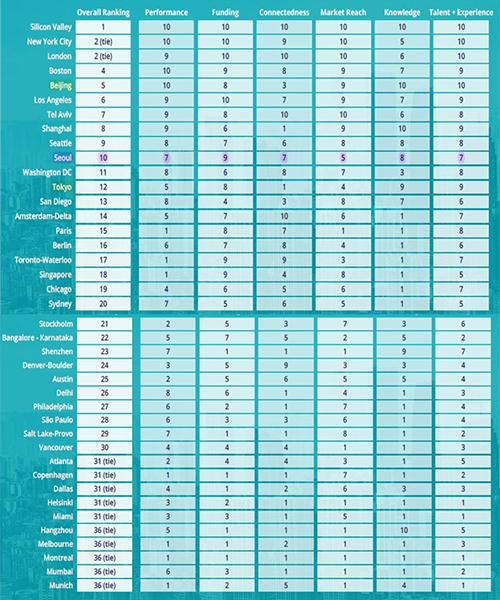 Seoul has made the global top 10 cities with strong startup ecosystem for the first time in annual ranking by research firm Startup Genome.

The capital city of South Korea ranked 10th best city for startups in Startup Genome’s Global Startup Ecosystem Report 2022, which compared the ecosystem for startups in 280 cities across 100 countries.

Seoul’s jump in global ranking owes to the city’s strength in early-stage funding, recording $2.3 billion from the second half of 2019 to 2021 which was four times bigger than the global average of $687 million. It is No. 1 among Asian cities, coming before Beijing and Tokyo.

Seoul recorded five major exits, with e-commerce giant Coupang included as the proudest graduate. The time taken for venture capitals from investment to exit averaged 8 years in Seoul, much shorter than global average of 9.4 years.

The most striving sectors in its ecosystem were artificial intelligence, life science and robotics.

The city, however, has yet to improve its competitiveness in market reach. It scored 5 five out of 10 in the category.

It plans to focus efforts on expanding opportunities for Korean startups to make inroads into global markets.

By Park Je-wan and Cho Jeehyun