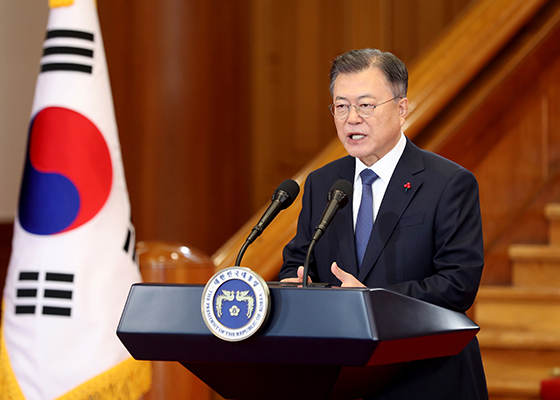 South Korean President Moon Jae-in on Monday vowed to continue efforts to normalize ties with North Korea in hopes to achieve his biggest goal of institutionalizing permanent peace on the Korean peninsula until his final day in office in May and deliver the nation in stronger health and outlook to the incoming administration in the aftermath of protracted battle with Covid-19.

“If there is a chance, the government will seek ways to normalize inter-Korean relationship and set grounds for irreversible peace till the last day,” said Moon in his last live New Year’s address before his five-year term ends in May.

While noting that “peace, prosperity, and unification are a wish of the people,” Moon said that his administration went through bumpy path in inter-Korean relations. Although there were many achievements, Moon said that there is still a “long way to go.”

“Peace is an essential prerequisite for peace,” he said. “But it can be shaken if not institutionalized.”

South Korea and the United States have made progress over the end-of-war declaration but North Korea that wrapped up five-day key party meeting did not reveal any new plans on relationship with the South or the U.S..

Moon also proposed the New Year as the year of completely overcoming crisis and walking towards “normalization” after years of combat with Covid-19. He thanked medical workers for their devotion during the pandemic and offered condolences to those that lost their loved ones due to the virus.

Moon also hoped for the upcoming elections to become a momentum to unite the society instead of deepening division and hostility.