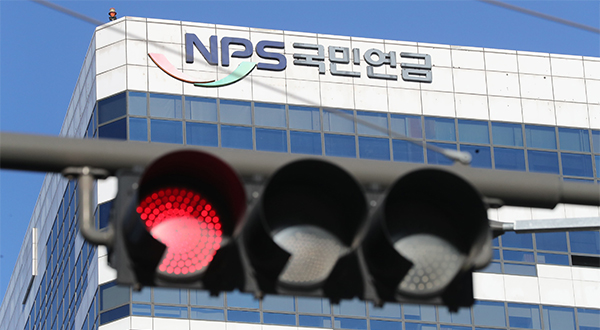 Those aged 32 or younger in South Korea may not be able to receive any monthly pension from the state after their retirement as the state-run National Pension Service (NPS)’s assets, which are currently the world’s third biggest, are expected to dry out by 2055 due to the fast aging and low birth rate.

According to the Korea Economic Research Institute (KERI) on Thursday, the NPS is projected to register a deficit by 2039 with its asset reserves depleted by 2055 from peak at 1,027 trillion won ($842.2 billion) in 2030.

Contributions from 100 adults to the NPS supported 19.4 elderly people as of 2020, but the number jumps to five-time larger 93.1 by 2050. At this rate, those aged 32 or younger would not receive monthly pension when they become eligible for the state support at the age of 65 by 2055.

State pensions are not enough to support senior citizens even now. As of 2018, elderly people in Korea earned 25.9 percent of their income from monthly pensions, less than half of the average 56.1 percent ratio of the five major countries – the U.S., the U.K., France, Germany and Japan. 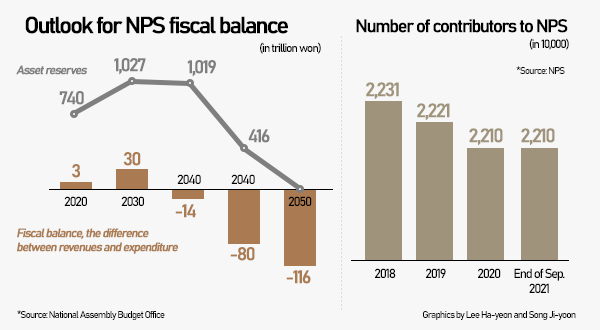 이미지 확대
The poverty ratio of Korean elderly is among the highest in the world. According to a KERI study, the ratio reached 40.4 percent in 2020, the highest among 37 OECD member states and three times larger than the average 14.4 percent of the above G5 countries.

Aged Koreans thus are struggling to earn a living. Earned income took up more than half of their total monthly income, or 52 percent.

Outlook also is dimmer for the country already grappling with low birth rates and fast aging.

“With a fundamental change in policy and situation, contributors will keep decreasing,” said KERI.

As the country’s monthly premium rate has been maintained at 9 percent for more than 20 years since the first rise in 1998 from 3 percent, some experts advise to up the rate to 12 percent while reducing the benefit.

By Lee Hee-jo and Lee Ha-yeon