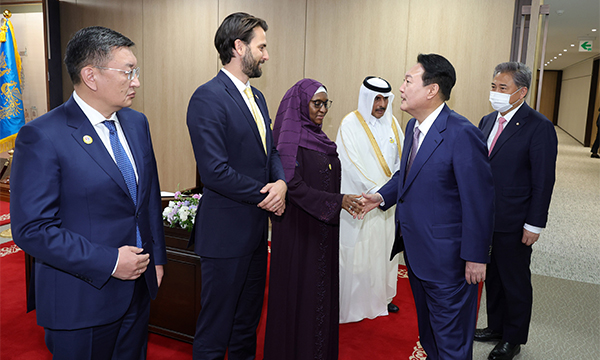 President Yoon Suk-yeol who has vowed to redeem reputation of South Korea’s nuclear reactor technology has gone straight to energy diplomacy by meeting with the head of the world’s biggest oil company Saudi Aramco in his second day in office.

Yoon met with Yasir Othman Al-Rumayyan, the chairman of state oil company Saudi Aramco and the governor of the Public Investment Fund (PIF), a sovereign wealth fund in Saudi Arabia, in Seoul on Wednesday. Yasir Al-Rumayyan has come to Korea as a member of delegation from Saudi Arabia to attend Yoon’s inauguration ceremony on Tuesday.

The Yoon administration is reversing the controversial nuclear phase-out policy of the previous Moon Jae-in government. He has vowed to raise the role of nuclear reactors to achieve energy security and realize carbon neutrality. The new administration has set a goal of exporting 10 units of nuclear power plants by 2030.

Saudi Arabia is among the Yoon administration’s key target markets for exporting nuclear power plants. The new Korean government reportedly is reviewing to designate 10 to 15 missions to go after reactor procurements in Saudi Arabia, Poland, and the Netherlands.

By Kim Dae-gi and Cho Jeehyun