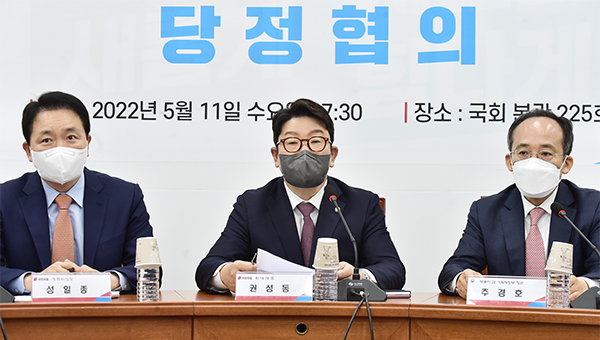 The People Power Party (PPP) and the government on Wednesday agreed to provide at least 6 million won each to 3.7 million small merchants and self-employed as promised by President Yoon Suk-yeol during campaign.

“We have asked the government to provide at least 6 million won to 3.7 million self-employed people, small merchants, and small firms with revenue of less than 3 billion won,” said Kweon Seong-dong, PPP’s floor leader.

The spending is aimed to compensate fully for business losses.

About 2.25 million low-income and vulnerable households will also receive up to 1 million won in one-time emergency funds.

The PPP also asked the government to include support measures for farmers and fishermen suffering from high inflation and those in travel, performance, and air transportation sectors that were excluded from previous compensation losses group in its extra budget plan.

The second supplementary budget this year and the first drawn up by the Yoon government is expected to be more than 33 trillion won.

The government has no plan to issue additional government debt to finance the supplementary budget, said Sung Il-jong, policy head of the PPP. Government bond yields have hovered about 3 percent due to oversupply of treasuries on top of faster rises in interest rates.

Experts have been advising the new government to scale or push back extra budget until inflation at decade-highs eases to some extent as extra liquidity can further fan inflation.

“The latest extra budget has been laid out in three directions – to provide compensation losses, add to quarantine measures, and stabilize prices,” said economy and finance minister Choo Kyung-ho.

The extra budget plan will be submitted for parliamentary approval on Friday after cabinet endorsement.