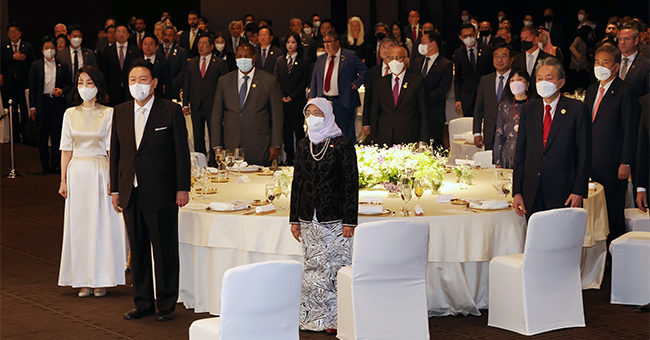 Top tycoons and business association leaders were invited to the banquet on the inauguration night Tuesday at Shilla Hotel in central Seoul. It was the first time for conglomerate leaders to be included in the guest list for presidential inauguration dinner.

KEF Chairman Sohn relayed the president stopped at each table to share greetings with each guest.

To business leaders, he reiterated he would uphold “market economy principles” as he declared in inauguration speech.

Last week, the Yoon government in announcing 110 state agenda vowed to support unmatchable leadership in chips, AI, and batteries where big companies have been investing heavily.

Samsung Group had pledged to spend 240 trillion won ($187.9 billion) over the next few years, which would fall under Yoon’s term. Its investment focus are chips, bio, AI, and next-generation telecommunications.

It has high hopes of Lee receiving full repatriation on Aug. 15 Liberation Day, when the president usually grants special pardon.

Lee is expected to meet with Yoon when U.S. President Joe Biden is in town for a summit May 20-22. Yoon is expected to accompany Biden who plans to tour Samsung Electronics’ chip plant.

Hyundai Motor Group is expected to accelerate moves to expand electric vehicle supply in line with the new government’s administrative agenda. The auto making group plans to expand EV lineup – IONIQ 6 this year and EV9 next year – and build an EV-exclusive factory in the United States.

LG Group is also enhancing investment in battery, display, and AI – sectors in which the Yoon government has designated as future strategy industries. LG Energy Solution is boosting its presence in the U.S. market by building a fourth joint battery plant with General Motors this year.

Lotte Group is seeking to reform its business portfolio focusing on retail and petrochemical more to bio and healthcare. Lotte – after 55 years since inception – has announced a big transformation to a bio and healthcare business. It is expected to actively engage in merger and acquisitions in the next five years and carry out new investments.

Business lobby group chiefs that attended the dinner event expressed expectation over Yoon’s regulatory reform policies. They are hoping the new president would see through his promises to reform regulations, labor, and public sectors.