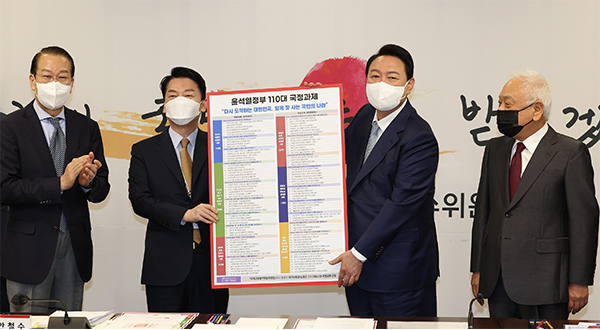 According to a list of 110 administrative agenda announced by President-elect Yoon’s transition team on Tuesday, the new head of state will preside over newly created regulatory and industry innovation strategy meetings to facilitate the growth of more innovative businesses in the country.

This is part of the Yoon administration’s efforts to drive Asia’s fourth largest economy’s growth through the private sector. To facilitate business activities, the new government will form a regulatory innovation promotion group consisting officials from the private and public sectors and academia to examine various regulations and suggest measures to improve them.

It will also expand and reform the current regulatory sandbox system to make it easier to create an innovative ecosystem for new industries. It will also promote citizens and businesses to actively suggest regulatory improvement through a newly created government system.

It will also give businesses in digital and low-carbon industries tax benefits for their research and development (R&D). Korean companies moving their manufacturing sites from overseas back home will enjoy income tax and corporate tax reduction.

Policy finance under the new government will focus on future core technologies and sectors that need large-scale funding such as carbon neutrality. The government will also roll up its sleeves to boost R&D on advanced industries such as chips and batteries, vaccines, displays, and hydrogen energy and offer tax benefits. M&As will become easier under the incoming government that will introduce a fast-track review system for M&As.

At a time when big economies tend to weaponize their resources and trade to influence rivals, the new government will set up a new security committee under Prime Minister consisting experts and related ministry officials to maximize national interest in strategic technology and supply sectors highly competitive among major economies. The Yoon government plans to establish a response system integrated with expertise of diverse sectors and enhance national security system, said an unnamed official from the transition committee.