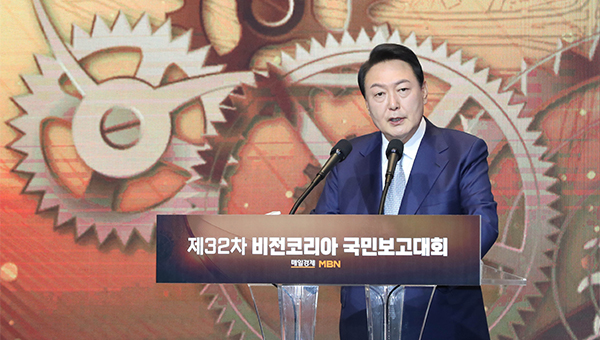 Yongsan, a district in central Seoul located on the northern bank of the Han River and long neglected as home to U.S. army base, is finally set for a complete makeover as the base for new presidential office.

Yongsan had been regular target of development blueprints in the past decade with government and city officials pushing to transform the central region adjacent to Seoul Station into a commercial landmark.

The projects repeatedly fell through amid an absence of a control tower on national level urban developments, mayorship of differing ruling force, and opposition from civic and environment groups.

President-elect Yoon Suk-yeol who is moving the presidential office from the Blue House to the defense ministry compound in Yongsan upon inauguration next week vowed difference.

“Yongsan is dynamically transforming and leading development of other cities,” Yoon said while attending Vision Korea event hosted by Maeil Business Newspaper and MBN on Tuesday.

Yoon noted that the district is to become a historical and cultural landmark representing Seoul.

Development projects thus far, however, lost driving force on dispersed agents leading different parts of the projects like the Ministry of Land, Infrastructure and Transport responsible for infrastructure creation, a committee under the Prime Minister’s Office for park creation, and Seoul City government for management of surrounding area. 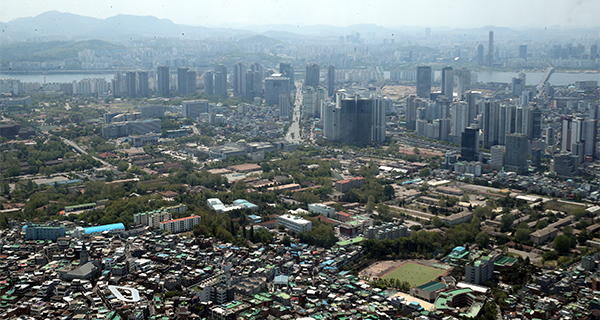 According to a study by Maeil Business Newspaper, Yongsan International Business District Project, or Yongsan Project, proposed in 2006 was a large-scale project worth 31 trillion won ($24.5 billion). It involved development of a former rail yard site and western Ichon-dong area.

The Yongsan International Business District Project was proposed in August 2006 as part of the government’s comprehensive measures to normalize railway management. When the national railroad operator switched to Korea Railroad (KORAIL) in 2005, it proposed to develop the railway maintenance site to pay back its 4.5 trillion won debt.

The project gained steam early on, with bidding launched in August 2007 for developers. In November, a Samsung C&T-National Pension Service consortium was named as project operator.

The railway maintenance site development project expanded further when Seoul city insisted to develop western Ichon-dong area as part of a condition for the development to improve Han River landscape. The large-scale project on 520,000 square meter site in Yongsan called for 31 trillion won in budget. 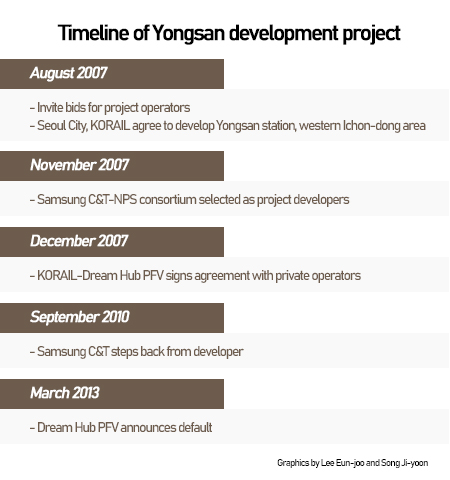 이미지 확대
KORAIL set up Dream PFV, a project financial investment firm, for the project to seek funds. The railway operator had initially planned to resolve debt by selling its maintenance site but it changed position as project operator as land price had soared and it expected astronomical profit from the development.

The project flopped when financial institutions to reinforce credit after the global financial crisis asked Samsung C&T and other Dream Hub investing construction firms for 1 trillion won in payment guarantee.

KORAIL and Lotte Tour Development, however, were at odds over development method while difficulties continued over financing. Dram Hub PFV went default and the Yongsan development project fell through.

The Yongsan development project has gone back to square one after 15 years of dilly-dallying.

Over the period, private firms engaged in the project have lost over 1 trillion won as of end of 2017.

Lee Jung-hyung, professor at Chung-Ang University, said that uncertainty rose over the project amid changes in political power and lack, of coordination among different government offices due to absence of a control tower for the development.

The transport ministry was a back-seat driver and refused to mediate between quarreling KORAIL and Lotte Tour Development.