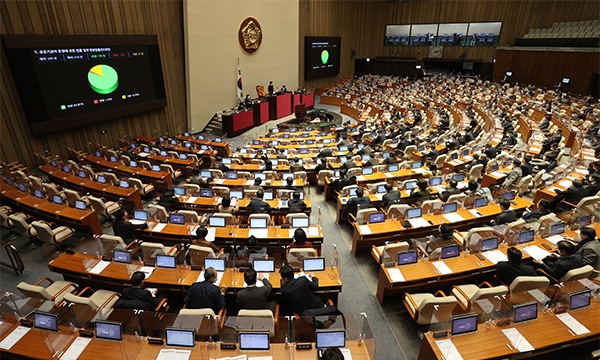 From as early as July, Korean public enterprises such as Korea Electric Power Corporation and National Pension Service will have to seat a labor representative on their managing board under a revised bill that passed the National Assembly on Tuesday despite concerns about the ramifications on the private sector in the longer run.

Lawmakers from both left and right wing approved a controversial bill revising the Public Enterprise Management Act mandating labor representation at public companies as a bid to win over union votes in the presidential election in March.

From the second half, 131 government umbrella and invested entities must seat one non-permanent member on the board.

The labor representative is entitled to the same voice and voting rights on management affairs with a two-year term that can be extended by a year. An employee of three years and longer is eligible to the seat upon recommendation from the employee or union representative or vote of approval from a majority of employees.

The labor representative bill taking effect six months after promulgation had been strongly protested by the conservative front, but the main opposition People Power Party voted to it after its presidential candidate Yoon Suk-yeol backed the idea to win votes from union. 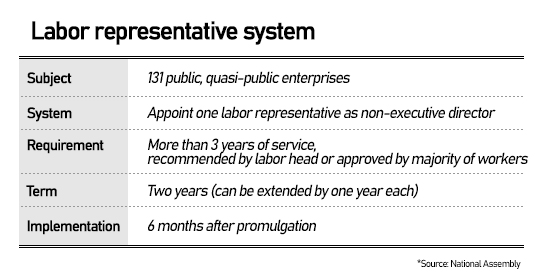 About 20 non-executive directors at the five financial public entities see their terms end this year and may be replaced with union representatives.

State-invested financial institutions Korea Development Bank, Export-Import Bank of Korea, Korea Securities Depository, and Korea Investment Corporation that fall under “other” public institution category are not under mandatory requirement, but their unions could demand the right.

Export-Import Bank of Korea has already named a labor-recommended non-executive director on management board in September last year. KDB and Industrial Bank of Korea may also follow suit, which could trigger similar demands at commercial lenders.