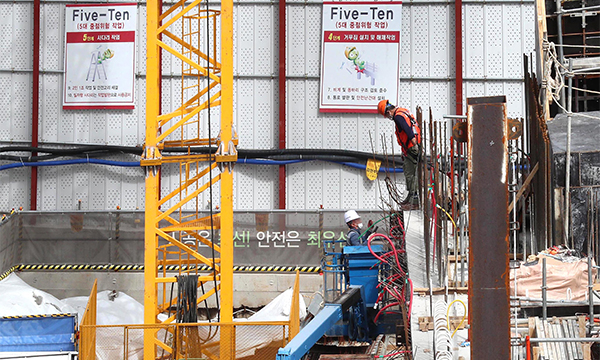 A construction site in Seoul [Photo by Lee Chung-woo]

The South Korean government under President Yoon Suk-yeol will seek to come up with measures to reduce the burden on businesses caused by the Serious Accidents Punishment Act (SAPA) that holds business management criminally liable for deadly workplace accidents, in a show of support for the private sector-led growth.

The administration will do its best to prevent any unfair damage from SAPA to businesses, President Yoon vowed on Friday during a banquet with the chiefs of the country’s five business lobby groups including the Federation of Korean Industries and the Korea Chamber of Commerce and Industry.

Yoon described SAPA a problematic law with “many loopholes” and raised concerns about punitive actions to be imposed by the law to willful misconduct or gross negligence in which it is hard to prove direct relationship between cause and effect, echoing the concerns of the chiefs about SAPA.

SAPA, which took effect in January this year, stipulates that business owners or executives should be imposed with criminal liability, including at least a one-year prison term or a criminal fine of up to 1 billion won ($760,000), for failing to ensure the safety of their business operations or their supervisory duties in cases of serious workplace accidents or public disasters caused by defects at facilities and transportation.

The nation’s business circles have been calling for a revision of the Act, saying that ambiguity in the law may cause abuse of power by investigative authorities. But discussions about the revision have not taken place yet at the National Parliament controlled by the main opposition party that supported the law passed under the previous Moon Jae-in administration.

After Yoon’s comments, the Yoon government is expected to come up with administrational measures to reduce SAPA’s negative impacts on businesses.

Yoon pledged to revise the law and lift regulations to foster the private sector-led economic growth during his presidential campaign.