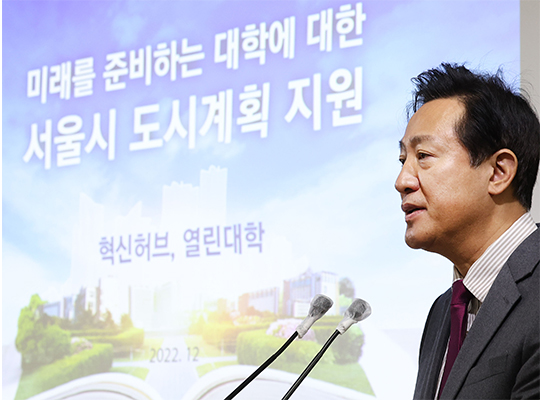 Seoul Mayor Oh Se-hoon addressing the press at a briefing held at the City Hall on Monday.

The city of Seoul will ease regulations on university campuses to allow their building to go taller and bigger for more spaces for experiment, research, and business creation especially in the field of cutting-edge technology at a time when the export-reliant Korea urgently needs new growth engines.

The plan was released by Seoul Mayor Oh Se-hoon during a press conference held at the City Hall on Monday.

Under the plan with an aim for implementation by the second half of 2023, the Seoul Metropolitan Government will introduce a new concept dubbed Innovative Growth Zones, which is not subject to the current floor area ratio that stipulates how much building can be constructed on a plot of land.

For a university building in the designated Innovative Growth Zone, the floor area ratio can be enlarged with an addition of given space limits on the campus playground or green area. In cases where space is still insufficient, the Seoul Metropolitan Government will revise the ordinance on urban planning to increase the overall floor area ratio for universities in the city by 120 percent. If everything goes as planned, a university will be able to build a high-rise building with a floor area ratio of up to 1,000 percent, equivalent to the level applied to a commercial district, the city explained.

The city also decided to remove building height restrictions on campuses if the impact on the surrounding landscape is not grave.

A university may file for the designation of an innovative growth zone, and the city of Seoul will conduct deliberation before a final decision. The space expansion in the zone should be intended to promote entrepreneurship, industry-academy cooperation, and research and development in science and engineering, the city said.

About 98 percent of 54 universities in Seoul are located in natural green areas or general residential areas, which are mainly low-density zones with a floor area ratio of less than 200 percent. About 30 percent or 16 universities are already at 75 percent of the building they are currently allowed, and nine campuses are at 90 percent or more, which means there is no room for expansion.

The Seoul Metropolitan Government said that universities that use 70 percent or more of their floor area ratio could secure an additional area of up to 530,000 square meters per university, adding the space expansion could lead to 1.18 trillion won ($0.9 billion) in investments and create 23,800 new jobs.

By Lee Hee-soo and Minu Kim