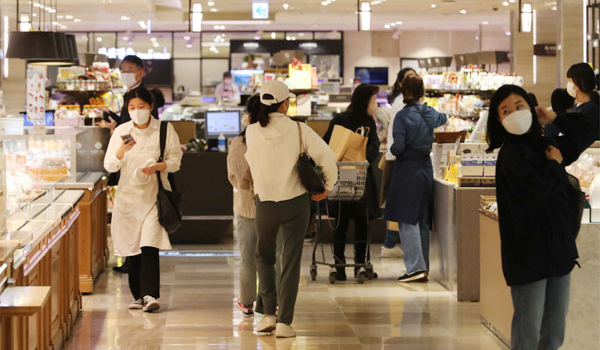 South Korea is seeking to come up with guidelines to lift the nationwide indoor mask-wearing mandate by late this month to enable people to go completely mask-free by the end of January.

Korean Prime Minister Han Duck-soo said Tuesday that the government plans to have a meeting on Dec. 15 to discuss whether to entirely scrap the face mask-wearing order and have the Central Disaster and Safety Countermeasures Headquarters prepare a roadmap with specific guidelines for the removal of indoor mask mandate by Dec. 23, said Han as he expected the country to reach the required level around the end of January.

The Korea Disease Control and Prevention Agency and other authorities initially expected that the country would be able to go mask-free from March. But the prime minister is hinting that lifting of face covering rule would come sooner if there is further improvement in infection control based on the guidelines. There, however, still would be exemptions, such as keeping the mask on in places vulnerable to infections like hospitals.

His remark comes after a number of local governments including Daejeon city have notified the national disease control authority that they will remove the indoor mask-wearing requirement in their respective regions. The central government has asked them to wait until the end of January.

Jung Ki-seok, chief of Covid-19 special response team, said the decision to remove indoor face mask mandate requires a prudent approach as it could result in a rise in infections and mortality. Jung suggested that the country will likely be able to lift the mandate in late January as most of the population would build immunity by then.

It seems to be too early to go mask-free in December when flu cases are on a sharp rise, Jung warned.

The country reported 77,604 new Covid-19 cases as of Tuesday midnight, the highest since Sept. 14.