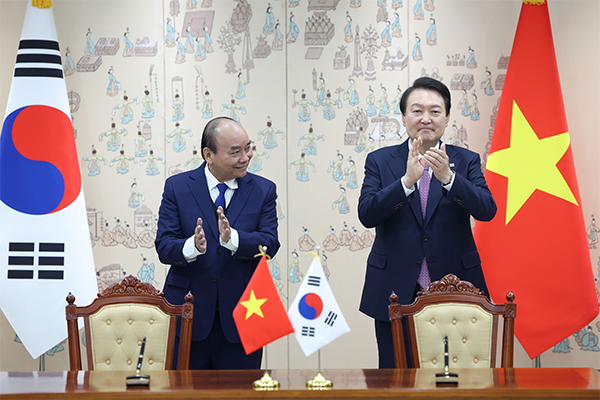 South Korea’s President Yoon Suk-yeol and his Vietnamese counterpart Nguyen Xuan Phuc agreed to strengthen bilateral ties with a goal of expanding trade between the two countries to $100 billion by 2023 and $150 billion by 2030 during a summit in Seoul Monday.

Phuc arrived in the capital for the summit as the first foreign head of state to make a state visit to Korea since Yoon took office in May. Vietnam is South Korea’s fourth-largest trading partner after China, the U.S. and Japan. The two countries’ trade volume surpassed $80.7 billion in 2021.

“South Korea and Vietnam are optimal partners to each other in trade and investment and we will actively support businesses from both countries to further promote bilateral trade and investment,” Yoon said in a joint statement released after the summit meeting.

President Yoon especially emphasized the establishment of a stable supply chain between the two countries.

“We share the view that there is great potential for cooperation between the two countries on the development of rare earths abundant in Vietnam and decided to seek concrete ways to cooperate on the sector,” Yoon said, vowing to further strengthen cooperation also in the fields of finance, telecommunications, high-tech, construction and energy.

Vietnam has the world‘s second-largest reserves of rare earth metals after China. On the sidelines of the summit, the two countries signed three memorandums of understanding on cooperation in the supply chain of key minerals.

The two countries also agreed to forge comprehensive and strategic partnerships. Yoon said that South Korea and Vietnam will further strengthen cooperation to drive a united response from the international community against North Korea’s nuclear weapons and missiles.