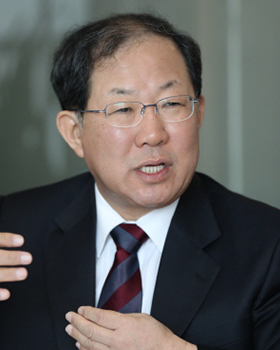 Park Byung-won, former honorary chairman of Korea Enterprises Federation (KEF), will lead a task force to promote the nation’s service industry, along with Finance Minister Choo Kyung-ho, raising expectations that his appointment will expedite regulatory reforms in the sector.

According to sources in the industry, Park will represent the private sector in the task force organized by the Yoon Suk-yeol government, while Finance Minister Choo will lead the public sector. Before returning to the private sector, Park worked in various public positions, including as a vice finance minister under the Roh Moo-hyun administration. While he worked in the government, he stressed the significance of the service sector in creating jobs. When a bill to promote the service industry was first submitted to the National Assembly in 2011, he called for its immediate passage into law in his capacity as the chairman of the Korean Federation of Service Industry.

After its launch in December, the task force will prepare measures to innovate the service sector. “The government will make a five-year plan to innovate the sector, including healthcare and content businesses,” Choo said. “It will also work on updating the bill for the promotion of the service.”

The bill was proposed in 2011 to deregulate the sector, including logistics, medical care, tourism, and educational services, but failed to pass the National Assembly due to objections from the medical sector.

By Lee Hee-jo and Jenny Lee