S. Korea joins US to co-host second Summit for Democracy in March 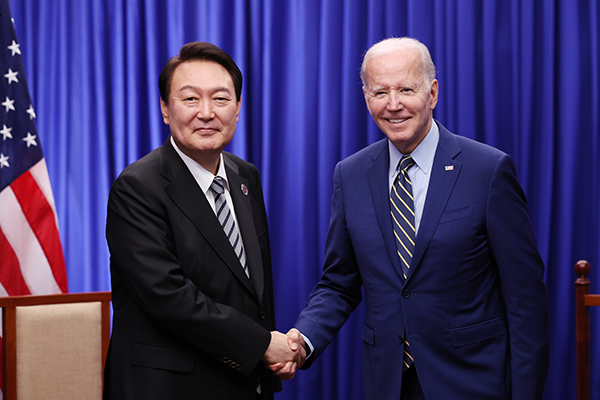 Yoon and Baiden at summit in Phnom Penh on Nov.13. [Photo by Yonhap]

South Korean president Yoon Suk-yeol will be joining his U.S. counterpart Joe Biden and three leaders each representing continents of Europe, Africa and Latin America to co-host the second Summit for Democracy on March 29-30.

The White House and the Office of the President of Korea announced in separate statements about the virtual summit, which will also include governments from Costa Rica, the Netherlands and Republic of Zambia.

“Together with other invitees to the second Summit, we look forward to taking up this call, and demonstrating how transparent, accountable governance remains the best way to deliver lasting prosperity, peace and justice,” the White House said in the statement. “Building on the first Summit for Democracy held in December 2021, this gathering will demonstrate how democracies deliver for their citizens and are best equipped to address the world’s most pressing challenges.”

The statement also said, “Together we will showcase progress made by the Summit partners on commitments during the Year of Action, and will reaffirm the vitality of the democratic model and collective action to meet the unprecedented challenges of our time.”

The first Summit started by President Biden in December last year to respond to rises in authoritarianism and the decline of democracy. Heads of state from over 110 countries participated on agendas such as anti-corruption, anti-authoritarianism and human rights promotion. At that meeting, participating countries announced about 759 pledges to defend and strengthen democracy internally and externally.

At the first meeting, President Biden criticized dictators’ oppressive policies, emphasized the need for solidarity among democratic countries and use democracy to press China and Russia. China protested that the U.S. was inciting division by putting democracy first.

Plenary meeting will be held virtually on the first day of the second Summit, followed by hybrid gathering with representatives from government, civil society and the private sector.

The Korean government will lead the Indo-Pacific region meeting on the topic of anti-corruption and will be attended not just by government ministers from countries but also academics and civil society experts will participate.

Korea will share its democracy experience and anti-corruptions efforts with the international community and will continue to expand the horizon of value diplomacy through this opportunity, the Office of the President said in the statement.