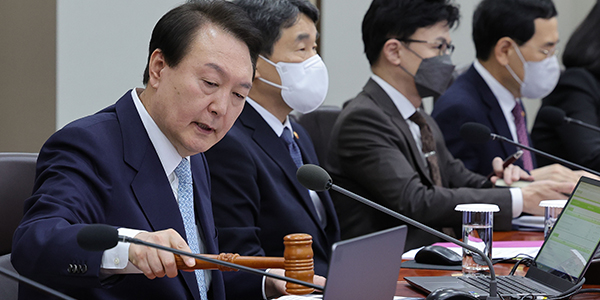 The South Korean government on Tuesday for the first time has invoked a binding order for unionized truckers in cement industry to return to work to prevent the nationwide strike from causing “a serious crisis to the national economy.”

“Normalizing the economy after a standstill would require great sacrifice and cost,” said President Yoon Suk-yeol after a cabinet meeting approving the first-ever use of the 2003 law demanding immediate return to work by transportation workers if their collective action causes serious threat to the economy.

The strike by truckers has caused standstill in construction and industrial sites due to cease in delivers of cement and steel. Further delay could threaten the everyday lives of the people, Yoon said.

The Ministry of Land, Infrastructure and Transport issued the order to cement truckers.

They must return to work before next midnight after receiving ministry letter. Refusing to do so without justifiable reason will lead to license suspension and criminal punishment of prison sentence of three years or under 30 million won ($22,562) in fine.

Yoon noted that there is no justification and legitimacy in an act that keeps national economy and people’s lives hostage to achieve their own profits and called unionized truckers’ move attacking non-union members for not taking part in the walkout “criminal” that cannot be tolerated.

Yoon asked unionized truckers to return to their own locations before “it is too late.”

Yoon also expressed “regret” at the forewarned strike by subway and railway union members and vowed to take stern action according to law and principle.