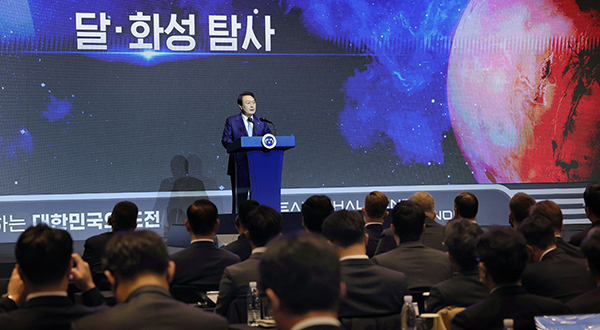 South Korea has pushed its space drive with the first specific long-term roadmap by creating a space agency in the likes of the U.S. National Aeronautics and Space Administration with an ultimate goal to land independently on Mars by 2045.

“Countries with a vision for space will lead the global economy from now on to solve problems of the mankind,” President Yoon Suk-yeol said Monday in an event in Seoul unveiling the vision for space economy. “In the coming future, it will not be successful countries envisioning space, but countries with vision on space who will become successful.”

Korea plans to develop a projectile engine that can head to the moon in five years and begin resource exploration after landing on moon after 10 years in 2032, according to Yoon. By 2045, Korea will stick national flag on Mars.

“As we achieve one path after another, we will be able to develop technologies unimaginable in the past and explore unchartered territories,” Yoon said.

Six action plans are comprised of exploration of moon and Mars, promotion of space technology, industry, manpower, and space security and lead in international cooperation.

Yoon vowed to double space development budget within five years and make sure minimum 100 trillion won ($74.5 billion) goes into the sector through 2045. Korea will create an exclusive fund that will support the founding of its own private space company that will lead the global market. Space technologies include next-generation projectile development, independent projectile and satellite key component technology, and Korean global positioning system (GPS) setup. 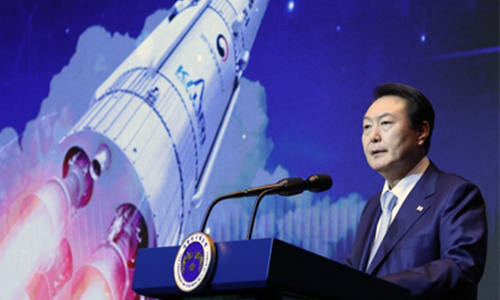 Korea will also run an integrated training program to nurture talents in the space industry, create a space technology research center at universities and expand research capacity through joint projects with outstanding research institutions at home and abroad including NASA, Yoon said.

Since space technology is directly related to security, Korea will enhance private-public partnership to develop space security technology. It will leverage on traditional Korea-U.S. alliance for space alliance and expand space security cooperation with others.

Yoon will work to create NASA-like space agency to achieve the roadmap.

Yoon has been an avid supporter of space economy. He laid out the plan to create a space agency like NASA as part of national agenda since transitional stage. Yoon also announced a space economy vision on July 6 and shared the idea of establishing a space industry cluster system in South Gyeongsang Province, South Jeolla Province, and Daejeon in August. He also held a virtual meeting with Tesla and SpaceX CEO Elon Musk on Nov. 23 and shared how Korea is working to enhance its space industry competitiveness to open a space economy era.

Separately, 70 companies engaged in space development including Hanwha Aerospace, LIG Nex1, and KT SAT on Monday announced a joint statement to realize space economy. They vowed to create a new growth engine based on the future space economy roadmap and realize the dream of becoming a strong space economy nation in 2045 when it celebrates the 100th anniversary of Liberation Day, according to Song Kyung-min, head of Korea Association for Space Technology Promotion.