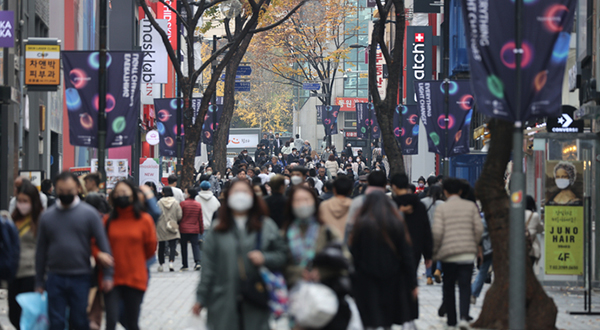 Myeongdong is poised to reclaim its fame as tourists’ must-stop shopping mecca in downtown Seoul, South Korea’s capital city, after a three years-long slump under the virus situation, thanks to the fast recovery in the number of local and foreign shoppers visiting the area in the latter half of this year.

Global sportswear brand Adidas is reading a large-size outlet near Myeongdong Cathedral for a grand opening by the first quarter of next year. It is returning to the shopping street after shuttering its previous Myeongdong store in March.

Local fashion firm Eland’s signature fast-fashion brand SPAO already reopened its Myeongdong store in September after the closure due to poor sales under the pandemic restrictions.

Restaurants and cafes also are accelerating entry into the district. Craft coffee company Blue Bottle aims to open its Myeongdong store within this year.

Changes in mood and signs of a recovery are detected from fast rising floating population to the district. Average floating population in Myeongdong currently reaches 115,441 per day versus 82,386 a year ago, according to the Korea SMEs and Startups Agency. The figure is nearing to the level before the virus outbreak, or 129,862 recorded in December 2019.

Foreign tourists to Korea also jumped to 337,638 in September, nearly quadrupled from 89,800 a year earlier, amid an ease in social distancing and the removal of the mandatory entry PCR test. Combined sales of Korean duty-free shops in September rose to 1.77 trillion won amid strengthening in the U.S. dollar.

Increasing visitors have pushed up sales of stores in Myeongdong. Combined sales of all registered businesses in the district soared 38 percent on year to total 28.3 billion won ($21.3 million) in the third quarter. Revenue in the July-August period, excluding September sales, exceeded the third-quarter revenue of last year.

Hotel and resort business in the area also is thriving. As of August, monthly sales of hotels and condos in Myeongdong averaged 22.80 million won, surging 84.3 percent from the previous month.