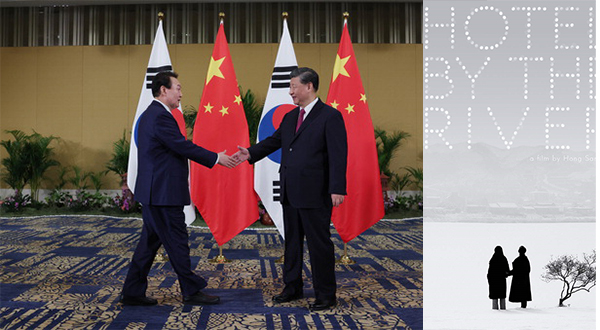 Summit Meeting in Bali and the film ‘Hotel by the River’

A Korean movie became available on a Chinese streaming platform for the first time in six years to raise expectations for easing in Beijing’s ban on Korean contents following the first summit meeting between the two heads in three years on the sidelines of G20 meeting in Bali last week.

South Korean Director Han Sang-soo’s 2018 film “Hotel by the River” has been uploaded on the Chinese OTT platform Tencent’s WeTV under the title of “Jiang Bian Lu Guan.”

An official at the Korea Film Council overseeing the Chinese market said that this is the first time South Korean film produced or released since 2017 has been uploaded onto a China’s major OTT platform, such as Tencent, Youku and iQiyi.

South Korean contents have literally vanished after Seoul decided to bring in the U.S. Terminal High Altitude Defense (THAAD) antimissile battery in 2016, which was considered as a security threat to Beijing. There have been signs of some easing lately.

A 2020 film “Oh! My Gran” that starred Na Moon-hee and Lee Hee-joon, was released in mainland China in December last year, although no other Korean films were released since then.

Easing restrictions on Korean drama was made faster. “Something in the Rain” received approval to be aired by China’s broadcasting authority in February this year. It was the first Korean drama to pass the restriction. A total of 13 dramas, including “Itaewon Class,” “Another! Miss Oh’’ and “Prison Playbook,” have been serviced in China.

Beijing is yet to entirely liberalize the market for Korean contents.

Chinese President Xi Jinping during the 25-minute brief meeting with his South Korean counterpart Yoon Suk-yeol said he is open to human and cultural exchanges between the two countries and made remarks that exchanges and communication should be made in various areas.

By Sohn Il-seon and Kyunghee Park