Cargo truckers in South Korea to go on indefinite strike 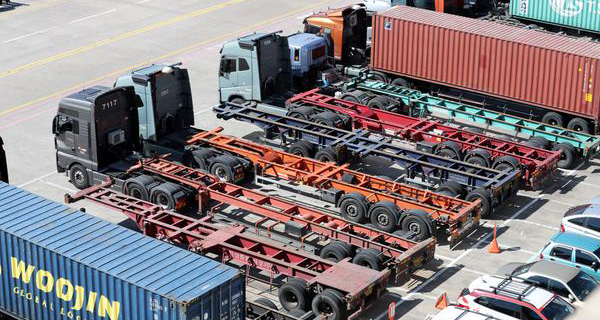 Cargo truckers in South Korea will stage a nationwide strike over guaranteed wages again starting Thursday, five months after they agreed to end an eight days-long strike in June that caused companies a total of 1.6 trillion won ($1.19 billion) losses.

The Cargo Truckers Solidarity, affiliated with the Korean Confederation of Trade Unions, is expected to embark on a strike for unlimited period on Thursday, demanding an extension of the so-called Safe Trucking Freight Rates System, minimum freight rates to prevent drivers from dangerous driving that are to sunset at the end of this year.

Cargo drivers grounded their trucks with the same demands in June that caused industrial-wide disruption in production and shipping across the country. They returned to work as the Ministry of Land, Infrastructure and Transport agreed to prolong the minimum freight rates system.

Across-the-board industrial sites are doubling down on efforts to minimize inventories amid signs of another delivery disruption.

Steel industry is busiest among other sectors after failing to deliver 721,000 tons of steel products worth 1.15 trillion won during the June strike.

“The company is planning to deliver steel products in advance to minimize the loss,” said an official from Hyundai Steel.

For POSCO, situation is worse as the possible disruption could further delay normalization of its production lines, part of which has stopped after the first-ever week-long shutdown due to flooding caused by Typhoon Hinnamnor early September. Currently, only seven out of its 18 rolling lines are operational.

“Cargo truckers’ strike will cause problems in the process of warehousing of facilities and equipment for restoration. This could lead to a major setback to the entire production normalization schedule,” said an official from POSCO.

By Oh Soo-hyun and Lee Ha-yeon