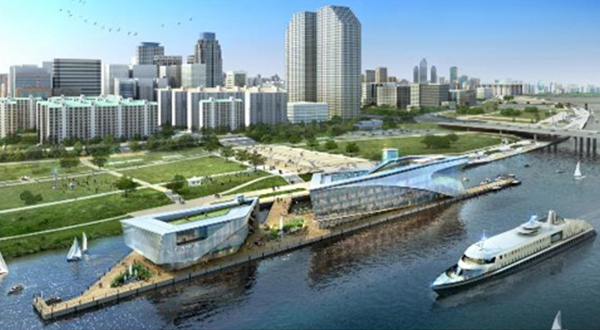 From 2026, uninterrupted trip by sea from Shanghai to the heart of Seoul may be realized as the capital city of South Korea is planning to add an internatinal dock at the Han River section of Yeouido.

Under a so-called West Sea Waterway project unveiled by the Seoul Metropolitan Government on Monday, the municipality will build an international passenger terminal called ‘Seoul Port’ in Yeouido by 2026 to increase the tourism resource value of the West Sea Waterway, which connects the Han River to the West Sea and Northeast Asia.

The project will be implemented in two major phases. In the first phase, cruise ships on the Hangang-Gyeongin Ara Waterway will be operated regularly from 2023, and in the second phase, Seoul Port will be established based on the city’s basic plan and feasibility study.

This year, cruise ships will be operated on a trial basis along the Han River-Gyeongin Ara Waterway with regular operation from 2023. The city already completed dredging work last September to secure a water depth of 3.5 meters in the waters near the locks of the Han River to allow 1,000-ton ships to come and go.

Next year, in line with the regular operation of cruise ships on the Han River-Gyeongin Ara Waterway, the current 65-meter Yeouido Wharf will be expanded to 95 meters to accommodate a 1000-ton cruise ship with a length of about 66 meters.

Based on the future demand for marine tourism, Metropolitan Government plans to expand Seoul Port as an international port connecting China and Northeast Asia by introducing customs and quarantine functions to the port.

By Park Je-wan and Minu Kim