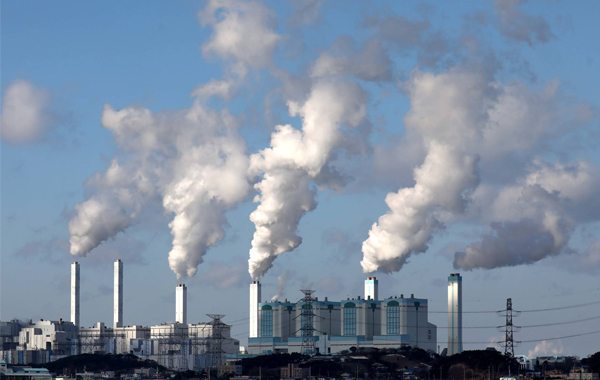 이미지 확대
South Korean government has decided to revise its 2030 greenhouse gas emission reduction target to 40 percent from its previous goal of 26.3 percent to speed up its carbon neutral push under a pledge to go zero net carbon emissions by 2050, but the bold revision will likely meet strong protest from the industry.

The presidential committee on carbon neutrality and related ministries announced on Friday they propose to revise the nationally determined contribution (NDC) goals to cut greenhouse gas emissions by 40 percent from 2018 levels, drastically increased from the original target of 26.3 percent.

South Korea uses 2018, the peak year of its gas emissions, as the benchmark year in setting the NDC goals.

The latest NDC target drafted by the carbon neutrality committee comes in response to the passage of the climate crisis response act in August, which mandates over a 35 percent cut in emissions by 2030 against 2018 levels. Through the legislation, South Korea has become the 14th country in the world to cement the carbon neutrality goal into law.

The revised goal also calls on the construction sector to expand clean energy use and the transportation industry to bolster pollution-free vehicle supply and transportation demand management. The waste management industry should work towards waste reduction and recycling and expand use of biodegradable bio-plastic.

To accelerate greenhouse gas absorption and reduction, the government has vowed to expand application of carbon capture, utilization and storage (CCUS) technology.

“The 40 percent goal is a very ambitious aim even compared to other countries, reflecting the (current) administration’s strong commitment to combating climate change,” the government stated.

The government will hold an online forum to gather opinions from various industries on Friday and plans to finalize the revised NDC plan subject to deliberation by the carbon neutrality committee and the cabinet meeting within this month.

Korea will officially announce its revised NDC goal to the international community at the 26th United Nations Climate Change Conference (COP26) slated for November and report a finalized government plan to the United Nations in December.