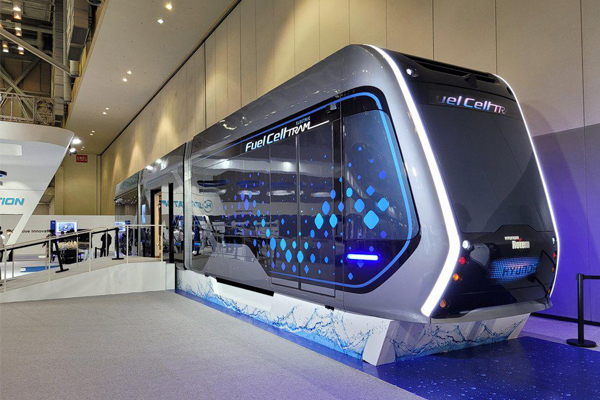 이미지 확대
South Korea has initiated a 42.4 billion won ($35.8 million) project to commercialize hydrogen-powered trams by the end of 2023 as the next-generation eco-friendly urban transportation means to expand hydrogen-powered mobility.

The project aims to test and secure core technologies in four sectors for commercialization of 380kw fuel cell to power trams, equivalent to four units of 95kW hydrogen fuel cells for Hyundai Motor’s NEXO crossover SUV, according to the Ministry of Trade, Industry and Energy on Thursday.

Hyundai Motor Group’s locomotive and rolling stock unit Hyundai Rotem Co. will lead system integration and verification, together with five smaller train components firms. They will work on development of motors and braking systems for the tram by next year and focus on manufacturing of hydrogen trams with the developed components and test of its performance in 2023.

As for the hydrogen fuel cells and element component technologies, the Korea Automotive Technology Institute will join forces with seven hydrogen vehicle component manufacturers and university research centers to install the converted hydrogen fuel cell from that of Hyundai Nexo SUV and storage system on roof of the tram for a larger cabin.

The test will also be done for technological standardization and driving performance assessment, as well as driving environment assessment and operation technology verification. Idled railway between Ulsan station and Ulsan port will be used to verify the optimal driving pattern and mileage.

Once the test has been completed, the government plans to mass produce the hydrogen tram from 2024 and explore new sales network at home and abroad. Regional governments with a new urban railway plan like Ulsan and Dongtan are the first candidates for application of the new zero-emission urban transportation in Korea.

Hydrogen-fueled trams are emerging as an alternative to subways, which requires cheaper construction costs with no use of power supply infrastructure. Currently, major countries like Germany and Japan are testing out the service for commercialization to lead the early-stage market.