The long-delayed project to add a second airport in South Korea’s most popular resort island of Jeju has been rejected by the Ministry of Environment after two-year-long reevaluation.

The Ministry of Land, Infrastructure and Transport and Jeju autonomous government have been pitching for the second Jeju airport in Seogwipo on the southern tip of the island by 2025 at a cost of 5 trillion won ($4.35 billion) as the single airport in Jeju City built in 1968 cannot meet the overwhelming demand.

Jeju International Airport located at the north with a single runway is chronically congested to accommodate average 500 passenger flights a day. The airport delay rate goes up to 17 percent at the peak time and during the busy season.

The plan was ordered for reexamination twice in October and December 2019 before the latest rejection. In contrast, the ruling party revived and railroaded the airport project for Gadeok Island in Busan through a special law before the mayoral by-election last year despite government objection. 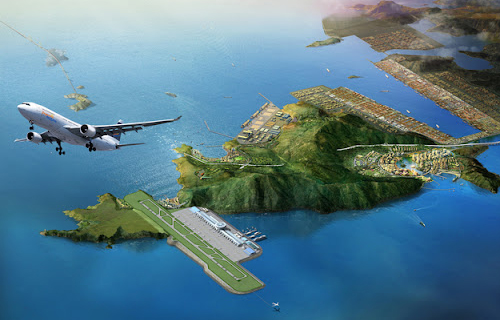 이미지 확대
The project to inject 28.6 trillion won, more than five-fold of the cost for Jeju airport project, to build a new airport on Gadeok Isaland in Busan was exempted from preliminary feasibility study and subject to much simpler requirements on the back of political support despite the same environmental issues such as a possible impact on marine environment.

The Jeju airport project is strongly protested by residents and environmental civic groups who have large say in major infrastructure projects.

The environment ministry in April ordered second reexamination of the environmental effect report for the new cable car project in Yangyang, Gangwon Province. The order was the reversal of the Anti-Corruption & Civil Rights Commission’s decision that canceled the ministry’s earlier disagreement on the report amid strong opposition from the public.

In 2003, tunnel construction for the Gyeongbu high-speed railway was suspended for more than half a year due to a lawsuit filed by an environmental civic group worrying about the destruction of salamander habitats.

The land and infrastructure ministry plans to conduct thorough review on the rejected report and make subsequent action.