No. of int’l migrants falls at sharpest pace in 2020 amid pandemic 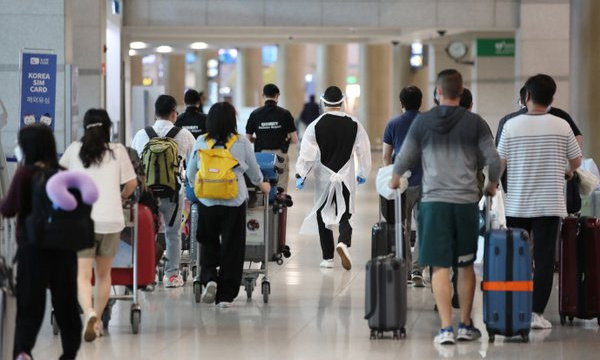 The number of South Korean and foreign migrants decreased at the fastest pace last year as cross-border movements were disrupted by the coronavirus pandemic, data showed Thursday.

The number of foreign entrants, referring to those who stay for more than 90 days in Korea, dropped 46.8 percent from a year earlier to 233,000 in 2020 with that of foreigners who left the country down 15 percent to 362,000, according to the data released from Statistics Korea.

The number of foreigners in their 20s showed a net outflow for the first time since the data became available in 2000. There had been more twenty-something foreigners who came to Korea than left for employment or study before the pandemic.

Meanwhile, the number of South Korean passport holders who came from overseas countries soared 41.5 percent from a year ago to 440,000, while that of Koreans who left the country decreased 31.9 percent to 199,000 in 2020.

That led to the largest net incoming migration of 222,000. The number of incoming Koreans under the age of 10 surpassed that of outgoing Koreans in the same age group for the first time since 2000.

A large number of Koreans who had studied or worked abroad came home due to school closures and business trip cancellation, according to Statistics Korea.