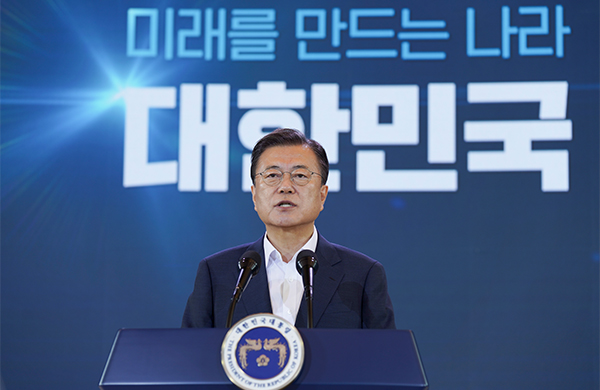 South Korea will spend 60 trillion won ($52 billion) more to scale up New Deal initiative to 220 trillion won by 2025 and devote 8 trillion won to support the youth population, announced President Moon Jae-in whose term ends in May.

“We are facing ongoing threat of Covid-19 and tougher social distancing scheme in Seoul and its surrounding areas, but our efforts to promote Korean New Deal must go on,” Moon said as he chaired the fourth New Deal strategic meeting held at presidential office Cheong Wa Dae on Wednesday.

He also vowed to set up a new pillar of “Human” New Deal on top of the digital and green New Deal schemes to significantly increase investment in humans and strengthen job and social security.

The budget on the so-called human area to ease inequalities will be doubled to 50 trillion won from 26.6 trillion won, with 8 trillion won specifically allocated for youth policy.

The addition comes at a time when ruling party candidates have launched primary contest for the March presidential election. The party has been rapidly losing favor with its traditional support base of 20s and 30s due to spike in housing prices and disgruntlement with the job market.

On digital New Deal policy, Moon said Korea will lead the future hyper-connected and hyper-intelligent era by enabling 5G and artificial intelligence in people’s daily lives and supporting technologies such as metaverse and cloud.

To expedite green New Deal, the government will revise greenhouse gas measuring and assessing system and accelerate transition to the low-carbon economy.

“Started as a job creation policy to mitigate the impact of Covid-19, the New Deal policy has advanced as a strategy to promote the low-carbon economy with active investment and private participation,” he said.