State utility Korea Gas Corp. hurriedly on Monday signed a long-term contract with Qatar’s state-owned Qatargas for annual LNG supplies of 2 million tons from 2025 until 2044 amid growing concerns about supply insecurity and spike in LNG prices that could translate into a jump in electricity bills amid the country’s scheme to wean away from coal and nuclear-powered generation.

LNG has become the primary source of power for Korea as of April, compared with the third place after coal and nuclear power three years ago, due to the government’s accelerated migration to non-nuclear green fuel.

Korea would be mostly running out of supplies it had secured before the rally in international prices by 2024.

The latest procurement from Qatar is less than half of the previous supply from the Middle Eastern country. Korea has brought in 4.92 million tons of LNG annually from Qatar.

By 2024, Korea’s long-term supply contracts for 9 million tons of LNG will expire - 4.92 million tons on contract with Qatar and 4.06 million tons from Oman, according to a government official who asked to be unnamed.

The share is a quarter of Korea’s total LNG demand, which would grow more under the government energy supply outline. 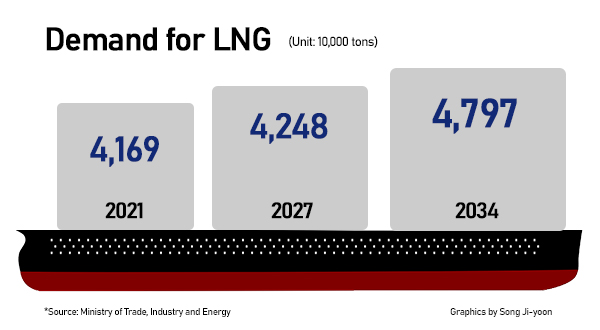 이미지 확대
According to the Korean trade and industry ministry, the country’s LNG demand is estimated to jump to 47.97 million tons by 2034 from this year’s 41.69 million tons.

The Korean government under the green initiative has been aggressively replacing nuclear and coal power plants with LNG-fired power plants despite the rising cost.

To meet demand, the government may have to buy new supplies at spot prices.

Under an LNG supply contract, a buyer must procure LNG at pre-determined prices, meaning that the Korean government may have to pay higher prices even after spot prices drop later. Spot LNG prices hit $3.215 per 1 million BTU last year, nearly doubled from a year ago.

Without long-term supply guarantees, the Korean government would end up buying LNG at spot price, which would also push up the electricity bills, warned a market observer.