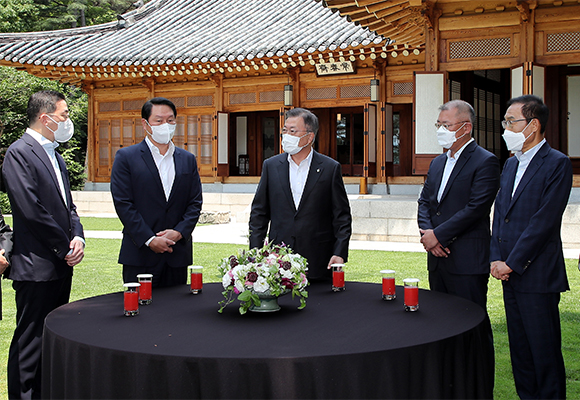 Shares of Samsung Electronics have opened Thursday stronger upon anticipation of its chief Jay Y. Lee coming out of the prison possibly within months after President Moon Jae-in expressed most positive response to the business petitioning for earlier release of the commander of the world’s leading chipmaker amidst intensifying global chip competition.

Moon had invited heads of Korea’s four major conglomerates – SK, Hyundai, LG and Samsung – to the Blue House on Wednesday for the first time since taking office four years ago to thank them for their contribution to the White House summit with President Joe Biden in late May with their pledge of near $40 billion U.S. investment in chip, battery, and electric vehicle sector. 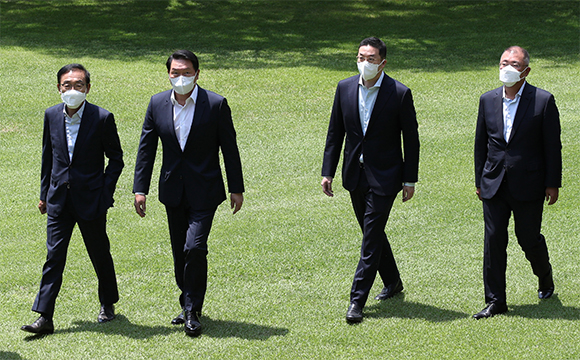 Chey, who doubles as head of the Korea Chamber of Commerce and Industry (KCCI), reminded Moon of the business lobby group’s request for a presidential pardon for Lee at the meeting, adding the post-Covid-19 era will need creative thinking.

Kim Ki-nam, vice chairman of Samsung Electronics attending on behalf of Lee, said Samsung needs the leader of the conglomerate for swift decisions on massive investments linked with its chip-making business.

Moon responded that he “understood” the situation, according to Cheong Wa Dae spokesperson Park Kyung-mee at a press briefing.

“I am well aware that the economic situation is panning out differently than the past and that bold corporate actions are required at these times,” he said, adding that there was a growing public consensus on the need.

During a press conference marking his fourth year in office last month, he had said the issue of granting presidential pardon on Lee hinged on “public consensus.”

Lee was sent back to jail in January upon his 30-month jail term sentence over retrial on a bribery case connected to impeached President Park Geun-hye. The business circle has been petitioning for his earlier release amid concerns of weakening in Korea’s chip supremacy due to delayed investment against aggressive chip investments by rivals.