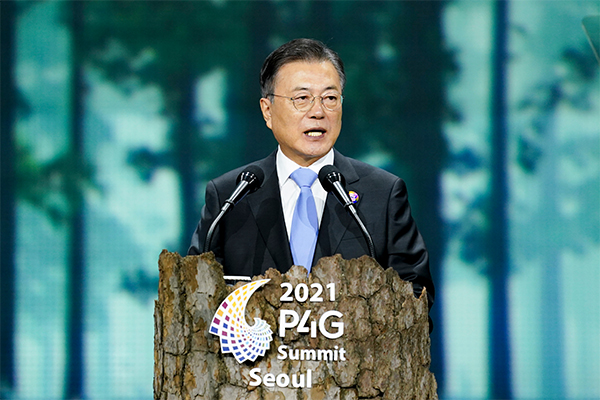 The South Korean government will bid to host the United Nations Climate Change Conference of the Parties (COP28) in 2023 to strengthen its green identity.

President Moon Jae-in introduced his vision to contribute to the world’s climate change mitigation efforts during the 2021 P4G Seoul Summit held on Sunday and Monday as Korea is serving as a leading nation for climate action. At the summit, Moon unveiled the country’s plan to host COP28 in 2023.

A ranking official from the Blue House said that the country is seeking to host COP28 in 2023 to “accelerate transition to low-carbon green economy to deliver on the U.N. Sustainable Development Goals (SDGs) and achieve carbon neutrality by 2050, as well as reinforce Korea’s stance as a leader of climate change action.”

The 2021 P4G Seoul Summit held on Sunday and Monday invited 47 leaders and high-ranking officials and 21 international organization heads virtually. The inaugural P4G Summit was held in Denmark in 2018 where only five heads of state joined.

To that end, it will spend 1.04 trillion won ($934 million) or 28 percent of its ODA budget of 3.7 trillion won for climate and green related projects to increase its contribution of green ODA to the level of global average at 28.1 percent from the current 19.6 percent. It will also form a Green New Deal fund worth $5 million at the Global Green Growth Institute (GGGI), founded in Seoul in 2010, and newly invest $4 million in the P4G.

In order to achieve the carbon neutrality goal by 2025, it will raise its Nationally Determined Contributions (NDCs), which are greenhouse reduction targets, and the new target will be announced at COP28 to be held in Glasgow in November.

Moon stressed his administration continued efforts to wean the country off from nuclear energy and fossil fuels, while reaffirming the government’s commitment to suspend its financial support for new overseas coal-fired power plant projects. U.N. Secretary General Antonio Guterres who participated in the summit praised Korea as the “leading partner” for green, inclusive and sustainable development and encouraged Korea to follow through with its coal phase-out plan.