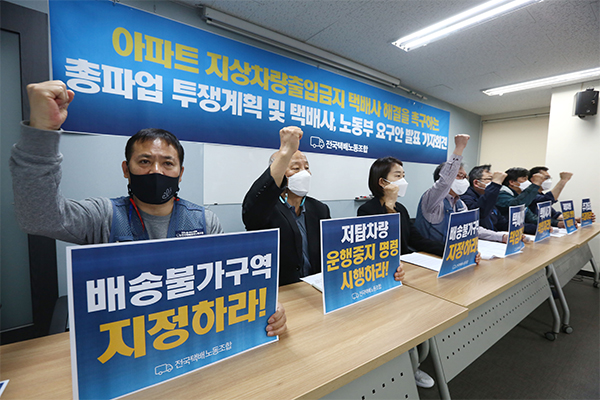 Unionized parcel delivery workers have voted to go on strike asking logistics firms to step in and resolve an ongoing conflict at a mega apartment complex in eastern Seoul over a ban on ground-floor parking.

A delivery workers’ union under the Korean Confederation of Trade Unions said Friday a proposed walkout was approved by 4,078 voters, or 77 percent of the total 5,298, which accounted for 82 percent of the union’s entire membership of 6,404.

The partial walkout is not expected to disrupt local delivery services, the union said, as around 2,000 workers will join the strike. There are more than 50,000 delivery workers throughout the country.

The date of the strike will be determined later by the union chairman, it said.

The vote followed a month-long conflict between delivery workers and a 5,000-unit apartment complex in Gangdong-gu, eastern Seoul, over a decision banning delivery trucks from parking on the ground floor for residents` safety.

The ban, which took effect on April 1, has been strongly opposed by deliverymen saying that the vast majority of delivery trucks in Korea would be unable to enter the underground parking garage due to height limit.

By Kim Gi-jung and Lee Soo-min