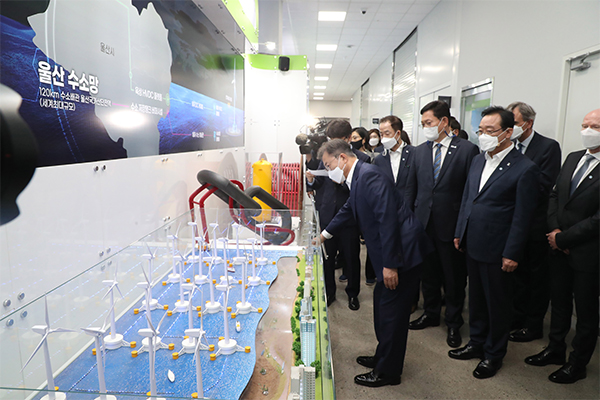 South Korean President Moon Jae-in takes a look at a miniature model of an offshore wind power farm to be built in waters off the coast of Ulsan by 2030. [Photo by Lee Chung-woo]

South Korea will invest 36 trillion won ($32.1 billion) to build a 6-gigawatt (GW) floating offshore wind turbine farm in the waters off the coast of southern port city of Ulsan by 2030 to power 5.8 million households in the region while saving about 9 million tons of carbon dioxide emissions annually.

“Korea will be able to produce half of the country’s offshore wind power output target of 12GW by 2030 (from here), moving a step closer to becoming one of the top five wind power countries,” South Korean President Moon Jae-in said on Thursday during his visit to the offshore power plant in Nam District in Ulsan.

For the green energy project, Korea will invest 36 trillion won in total in partnership with the private sector, including U.S. refiner Shell and Korean company SK E&S.

More than 1.4 trillion won will be invested by public and private entities by 2025 for the construction of the first phase preliminary assessment project. The government aims to approve the project next year and launch construction in the following year to complete the first stage by 2025 with over 1.4GW supply.

Korea’s first floating offshore wind power farm will reuse a floating drilling rig of Donghae (East Sea) gas field whose production expires in June next year. Once the offshore wind farm is completed, it will be capable of supplying power 5.8 million households in Yeongnam, or the southeastern region and reducing 9.3 million tons of carbon dioxide emissions every year. Of the total production, 20 percent will be used to create 84,000 tons of green hydrogen.

The project is also expected to create 210,000 new jobs, the presidential house said.

Experts are not so confident about the green power plan, saying that an offshore wind power farm is still in the fledgling stages of commercialization. They point out that the floating drilling rig is installed too far from the coast and therefore requires super-long submarine cables to deliver electricity.