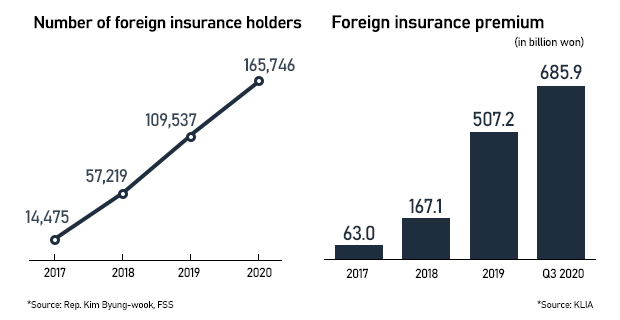 Due to the growing demand from those in their 30s to 50s who send their children abroad for schooling or move to other nations, the number of foreign insurance plans purchased by Koreans soared more than 10 times from 14,475 in 2017 to 165,746 in 2020.

The rising popularity has prompted worries on possible consumer losses from the financial authorities. They are also concerned about mis-selling, because consumers could misuse the products as a means of foreign currency investment without recognizing the risk of losing principal depending on foreign currency fluctuation.

To ease the concerns, the authorities are trying to require insurers to hedge the foreign exchange risks before selling the products, which could inevitably result in hikes in insurance premiums. Other measures include payment installment of agent fees, prior reporting system and toughening sale procedures.

But insurers say it is unfair for the authorities to make an issue out of foreign exchange risks when they allow equity-linked variable insurance policies carrying the risk of stock price volatility.

The American Chamber of Commerce in Korea (AMCHAM) also sent a letter to the Financial Services Commission to protest the regulatory move. The American business interest group reportedly emphasized positive aspects of the foreign currency insurance plans that allow consumers to diversify their asset portfolio, expressing worries on excessive regulations from the authorities, according to sources.