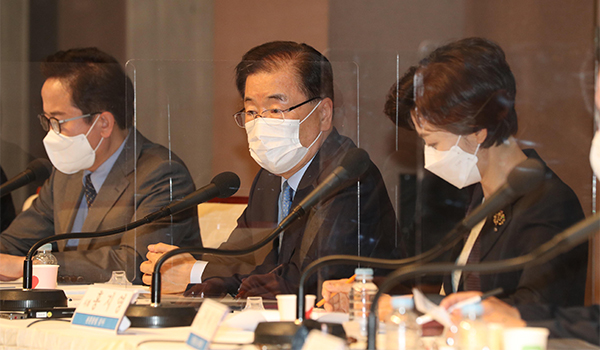 The so-called vaccine swap South Korea is pursuing with the United States won’t likely happen in the first half, Korean foreign minister Chung Eui-yong said Wednesday, a day after he publicly admitted the attempt.

Seoul has been pitching “A friend in need is a friend indeed” and reminded how it supplied test kits and masks to the United States during its shortage last year to persuade its ally to share some of its excess vaccines to the country with less than 3 percent vaccination progress due to delayed arrival of supplies, he said in a media conference hosted by Kwanhun Club, an association of senior journalists, in downtown Seoul.

“Based on the solidarity we showed last year, we hope that the United States can help us with our current vaccination challenges,” Chung said.

U.S. response however has not been positive.

“The U.S. explained that domestic situation is still difficult. It cannot share the stock until herd immunity is achieved, he added.

Meanwhile, a senior official of the U.S. Department of State declined to comment on Chung’s remark that Seoul and Washington were discussing a possible COVID-19 vaccine swap. Yonhap News reported the official said the U.S. government will not comment on the details of diplomatic dialogue. No explicit denial, however, indicates that a discussion between the two countries may be under way.