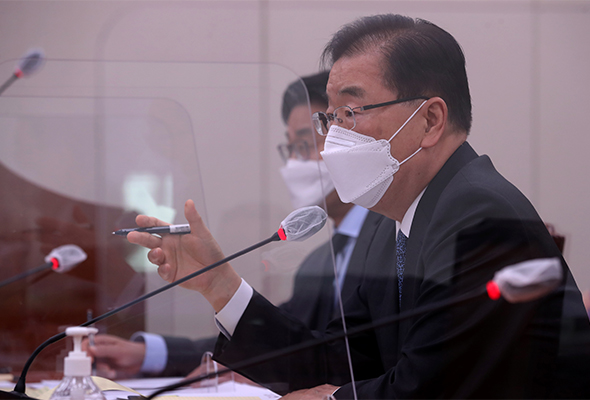 South Korea has been in “earnest discussions” with the United States on the idea of striking a “swap” deal in which it gets excess Covid-19 vaccines from the U.S. with the promise of handing over that much when Korea’s share arrives while the government is working to secure more than 79 million doses from multiple makers, government officials said.

During a parliamentary session on Tuesday, Foreign Minister Chung Eui-yong revealed bilateral talks have been in progress between Seoul and Washington on the potential vaccine swap deal with the U.S.

“The vaccine cooperation between Korea and U.S. is being approached through various channels,” he said, emphasizing alliance is the core of the discussions and cannot be influenced by other factors.

The vaccine swap idea has come forward as the United States fast returns to normalcy through vaccination progress. While America is discussing a third booster vaccine, with nearly 40 percent of the population receiving at least one shot or 25 percent two of two-dose vaccines as the country has enough jabs to go around to all adults.

In contrast, only 2.9 percent of Korean population has received one of two-shot vaccines to mark as one of the slowest in vaccine program in the developed category amid concerns for a fourth wave of Covid-19 outbreak.

On Monday, the country reported 532 more cases, raising the total caseload to 114,646. The government ensured it can meet its goal of achieving herd immunity by November as it is in discussion with multiple pharmaceutical companies, but whether it can keep its word remains doubtful, given the supply shortage at authorized makers. 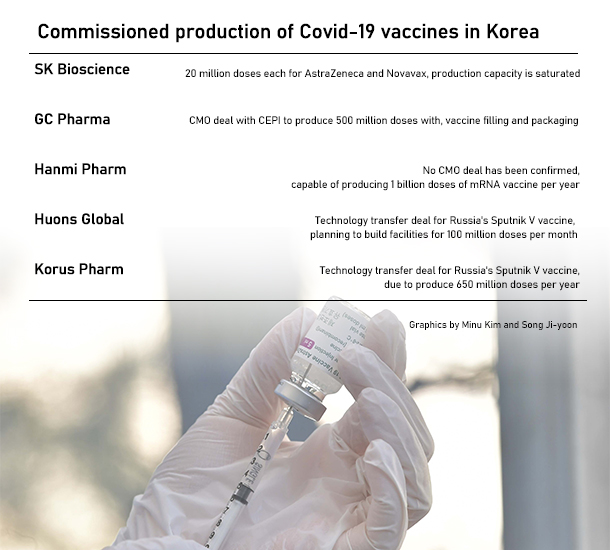 Moderna emerged as the candidate it had suggested including Korea to its JAPAC (Japan and Asia Pacific) vaccine supply network and forge a CMO deal for local production, according to NH Investment & Securities on Monday.

Moderna has so far signed local production agreements in the U.S., Switzerland, France and Span where it currently operates.

In Korea, several companies are mentioned to be able to roll out Moderna vaccines and they include GC Pharma and Hanmi Pharm. Last year GC Pharma signed a Covid-19 vaccine manufacturing contract with the Coalition for Epidemic Preparedness Innovations (CEPI), but details were not finalized including a vaccine type. GC Pharma is currently responsible for regulatory approval and local distribution of Moderna vaccines in Korea.

Hanmi Pharm announced it can produce up to 1 billion doses of mRNA vaccine per year at its biopharma plant in Pyongtaek under a potential technology transfer deal. SK Bioscience is another eligible manufacturer of Covid-19 vaccines, but its annual capacity is already full for orders from AstraZeneca and Novavax.