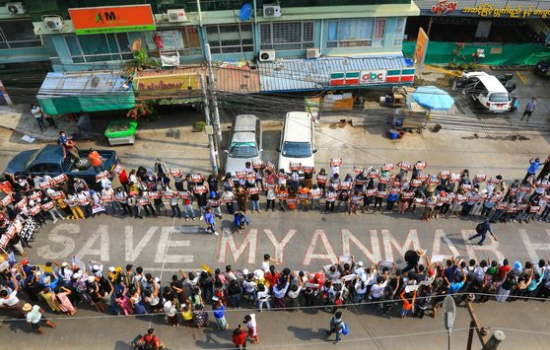 South Korean financial institutions have tensed up to review closure of operations in conflict-ridden Myanmar as expats come under safety risk.

Shinhan Bank has temporarily closed down its branch in Yangon, Myanmar’s largest city, and told all employees to work from home after a female staff was shot by the military on her way home in a company vehicle around 5 p.m. on Wednesday. She was immediately sent to a hospital and reportedly is in critical condition.

The bank has kept the business operation in Myanmar to minimum staffing with the headquarters in Seoul providing additional support, said a Shinhan Bank official on Thursday. The bank may consider evacuation of expats and families.

Currently, 28 Korean financial institutions including lenders, credit card firms and insurers, have branches or offices in Myanmar, according to the Korean financial authorities. They suspended operation immediately after the military coup broke out, and then resumed operation with a minimum number of staff after the Myanmar central bank ordered to run normal business hours.

Shinhan Bank has been operating in Myanmar since 2016. Its affiliate Shinhan Card also runs business in the Southeast Asian country with 25 outlets. Shinhan Bank’s Yangon branch has 36 employees – three Koreans and 33 local employees. Shinhan Card has 427 employees, including two Koreans, working at its 25 offices in Myanmar.

Other Korean financial institutions with operations in Myanmar are preparing emergency measures, although they are not considering evacuation yet.

A group official said only core employees are working on shift schedules and on reduced work hours in the evening. The group has brought the family members of Korean national employees back to Korea upon request but it does not have any plan of withdrawing its business from Myanmar, the official added.

KB Financial Group, which opened a local banking subsidiary in Myanmar early this year, has 24 branches and offices.

NH Nonghyup Bank has an office in Yangon with one local staff, and its affiliate Nonghyup Finance has 372 employees including three Koreans.

The firm said it does not have any plan for closing down or pulling out its business in Myanmar yet, but will take necessary steps according the Korean authorities’ recommendation.