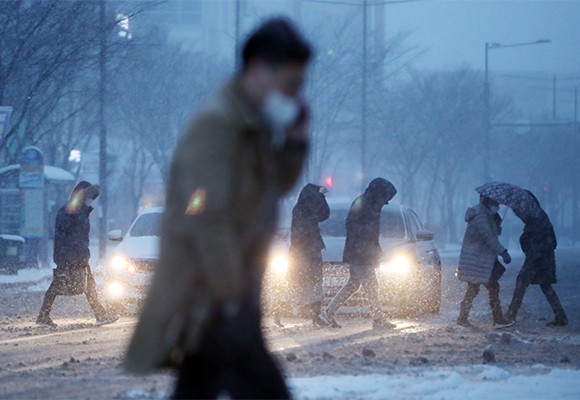 South Korea’s peak power demand hit a wintertime record of 90.2 million kilowatts on Thursday as the country has been swept up with heavy snowfall and freezing cold snap.

According to the Ministry of Trade, Industry and Energy, Korea’s maximum power demand reached a record high of 90.2 million kilowatts as of 5 p.m. on Thursday, topping a 90-million-kilowatt threshold for the first time during winter season.

The temperature in Seoul fell to minus 16.1 degrees Celsius (3.02 Fahrenheit) in the morning on Thursday, with physical mercury dropping to negative 25.3 degrees Celsius. Cold air headed south from the northwest, leaving other parts of the country under freeze of minus 13 to minus 3 degrees Celsius.

The Korea Meteorological Administration forecast the Arctic cold wave to continue until Saturday with most of the regions remaining in minus 10 degrees Celsius territory.

The ministry assured it will be fully prepared to provide stable power supply.