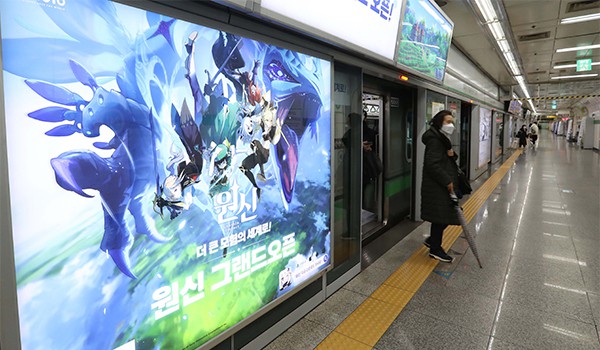 Chinese video game Genshin Impact is seen advertised at Ewha Womans Univ. Station on Seoul Subway Line 2 in this picture taken on Mar. 1. Korean game titles are restricted in China due to a local license regulation whereas Chinese games are increasing their presence fast in Korea. [Photo by Lee Chung-woo]

Korean IT service and game companies are urging the government formally complain about multiple forms of discriminative barriers in China or take the issue with the World Trade Organization (WTO).

China has been enforcing the so-called Great Firewall to control Korean apps and web services starting with Kakao and Naver services in 2014. Kakao Talk used by most Koreans around the world as chat platform does not work well in China. Web portal Daum and Naver’s key services also remain unavailable.

Chinese regulations stipulate connections to overseas networks must be carried out through a channel provided by the national public network, banning organizations or individuals from creating or using overseas networks on their own. Violations could lead to criminal charges.

In contrast, WeChat, China`s billion-user messaging app, can be used freely in Korea. Korea has no restriction on payment services offered by Chinese firms. Still, Korean nationals are required to open a Chinese bank account if they want to use Chinese payment services.

A Korean IT official pointed out that while Korean companies are blocked by the Great Firewall in China, Chinese IT names are unrestricted in their business in Korea.

The game industry is another victim to China’s disproportionate practices. According to Maeil Business Newspaper’s analysis of data from Game Rating and Administration Committee on Monday, all filed Chinese games were approved in Korea over the past three years except only two. There was no single pending rating related to local review in 2018 and 2020.

But China granted approval to only one Korean game in the same period. That game is Summoners War: Sky Arena from Com2Us, which was published in 2014. Another Korean game, Rooms: Unsolvable Puzzle, from HandMade Game which was approved this year 10 years after its development.

Capitalizing on the reverse discrimination on Korean games, Chinese titles are fast penetrating into the local market. Among the top 30 games in terms of sales, seven to eight came from China.

Chinese games are also dismissive of the industry’s self-regulation on randomized game items required by Korean laws. On Feb. 26, Game Self-Governance Organization of Korea announced 12 games not compliant with the self-regulation, where China topped the list with seven, followed by U.S. (three games) and Finland (two).

Korean businesses are increasingly calling for the government to make China aware that the entry ban on the Korean game is a violation of the WTO rules and that it is a significant obstacle to Korea-China economic and cultural cooperation.