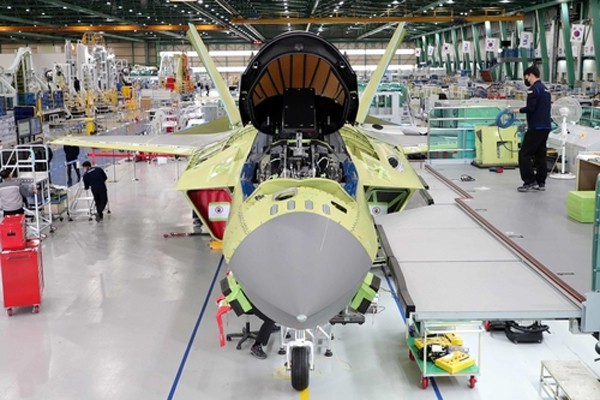 South Korea will roll out the first prototype of its indigenously developed next-generation fighter jet known as the Korean Fighter eXperimental (KF-X) aircraft late next month, according to the Defense Acquisition Program Administration (DAPA) on Monday.

The evolutionary development project was first announced in March 2001 during the Kim Dae-jung administration and the DAPA and Korea Aerospace Industries, Ltd. (KAI) embarked on the project in January 2016. The project is the country’s single largest defense R&D program worth 8.8 trillion won ($7.85 billion).

The maiden flight is due in July following ground testing after the April roll-out. Mass production will follow after 2,200 sorties by six prototypes are completed over the next four years.

Prototypes No. 2 and 3 will be assembled by the end of this year, and No. 4 to 6 by the first half of next year. Of these, No. 4 and 6 will have two seats each. The first prototype is at 90 percent level of completion.

The core equipment of the KF-X has been developed with domestic technologies, including active electronically scanned array (AESA) radar, infrared search and track (IRST) equipment. The target ratio of localization is 65 percent. Jet engines will be partially localized in cooperation with GE.

The exterior of the KF-X jet will be designed as a 4.5-generation jet similar to the F-35A stealth jet and research of variants will continue in future developments, said Jung Kwang-sun, director general of the KF-X Program Group under the DAPA.

By Ahn Jeong-hoon and Minu Kim