이미지 확대
The bipartisan move to enact a special act to build a new airport in Gadeok Island off southern port city of Busan ahead of the mayoral by-election in April has been met with strong opposition from the government authority in charge of infrastructure and transport governance.

The Ministry of Land, Infrastructure and Transport Ministry handed in its report to the National Assembly Committee on land and transport affairs, raising concerns for the cost, environmental damage, and security risk to argue that it would be committing “negligence of duty” if it does not oppose to the project that has neglected the legitimate procedures.

It projected the cost of the project at 28.6 trillion won ($25.8 billion), almost quadrupling the city government’s estimate of 7.5 trillion won.

If the new airport hosts both international and domestic airlines, the budget would be bumped up to 15.8 trillion won, the report said. If it includes a military flight facility as promised by the ruling Democratic Party that proposed to make the new airport as gateway to southeast part of the country, the price tag would be bloated to 28.6 trillion won.

Busan city envisions running the existing Gimhae airport only for domestic flights and moving international flights to the new airport to be built in Gadeok. But the report said it would make air travels more inconvenient especially for transfer passengers, citing similar cases of Tokyo and Montreal that had separated domestic and international lines into two airports but ended up in integrating the operation. 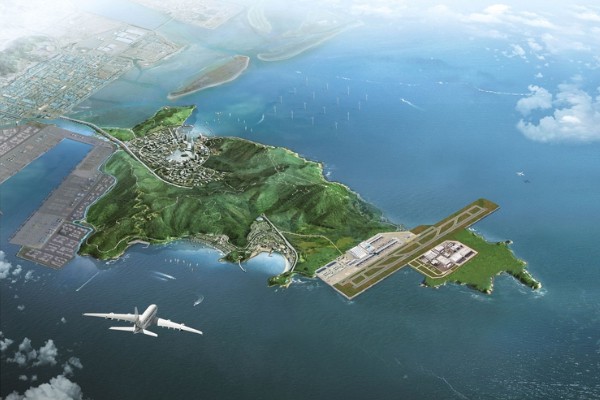 이미지 확대
The project would require reclaiming an area of 142 million square meters that is up to 106 meters deep, which would take at least six years. The open sea region is also vulnerable to typhoon and high wave, and it has a high risk of differential settlement of the underlying soils, according to the report.

The report said it is a “neglect of duty” for public officials not to follow legal procedures when they are responsible for promoting the public interests and preventing disadvantages. Major SOC projects like airports require multiple feasibility tests. It is also unusual to pre-designate a location for a SOC project and make it irreversible through a law.

The National Assembly transport committee as well as legislative committee however rubber-stamped the bill, which would be put up for vote at the full session on Friday where the ruling party dominates 170 out of 300 seats.

The Gadeok airport first floated by Busan lawmaker-turned-president Roh Moo-hyun in 2003 was killed after feasibility reviews in 2011 and 2016. It was revived ahead of the mayoral by-election coming up on April 7 after former mayor Oh Keo-don resigned last year over sexual misconduct allegations.