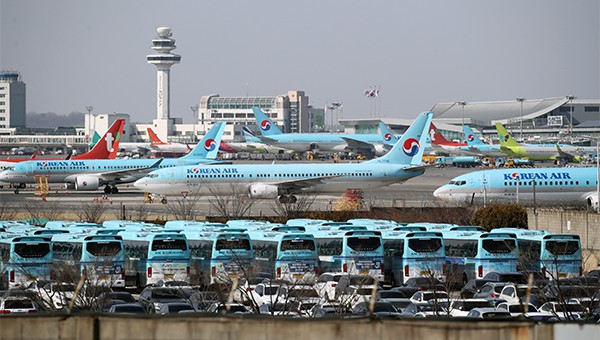 South Korea’s transportation authority on Wednesday issued an emergency order to inspect the PW4000 engines of all Boeing 777 jets operated by local airliners and ground the jets along with a ban on operations of all foreign aircraft with the same type of engines in the airspace over Korea.

The Ministry of Land, Infrastructure and Transport said in a statement Wednesday that it has ordered inspections of all 29 units of B777 jets with the PW4000 type of engine operated by the three local carriers—16 by Korean Air, four by its budget carrier unit Jin Air and nine by Asiana Airlines.

The latest order is in line with the U.S. Federal Aviation Administration (FAA)’s Airworthiness Directive (AD) issued for emergency inspections of the engine fitted in Boeing B777s following a recent B777 engine failure incident in the U.S. over the weekend, wherein a Boeing B777 aircraft being operated by United Airlines experienced engine failure shortly after takeoff causing debris from the broken engine to fall from the skies above Denver, Colorado.

This is also a follow-up measure to a special inspection order issued by the Korean transportation ministry on Tuesday to inspect the fan blades of PW4000 engines that have accumulated more than 1,000 cycles. A cycle is one take-off and landing.

According to the latest directive, the local airliners must separate the fan blades from the PW 4000 engines in the 29 units of Boeing B777s and send them to the engine manufacturer Pratt & Whitney for thorough inspection. All their B777s must be grounded until the end of the inspection and safety is ensured.

The ministry also bans all foreign aircraft with PW4000 engines from entering the South Korean airspace starting on Thursday.

The three local carriers said Tuesday they have already grounded all B777 planes.

Aviation safety inspectors will look into the airlines over whether they strictly follow the emergency inspection order, the ministry said.