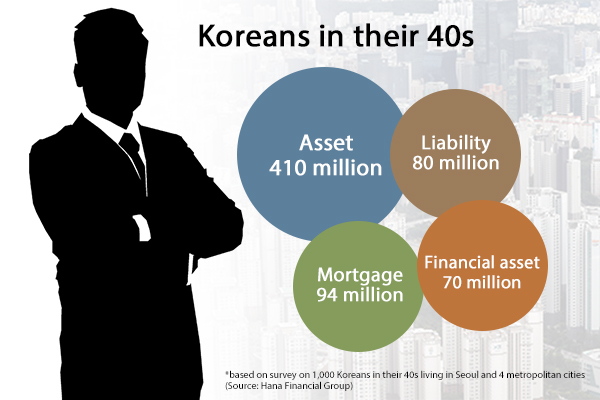 According to a report by Hana Financial Group based on a survey of 1,000 Koreans in their 40s living in Seoul and four other metropolitans in November last year, the respondents hold an average of 410 million won worth assets including cash, real estate, stocks and loans. More than half of them, or 51.6 percent, have assets of less than 300 million won, but 11.8 percent have 1 billion won or above.

Their liabilities reach 80 million won on average, leaving net asset at 330 million won. Five out of 10, or 52.6 percent, have an experience in taking out mortgage loans, and their outstanding balance averages 94 million won.

Bank deposits account for 57.7 percent of their financial assets, followed by endowment insurance policies at 18.6 percent, stocks 15.6 percent and others 6.5 percent.

About 38 percent of the respondents who have bank loans said their debt has increased due to the Covid-19 crisis. A majority of them, or 74.9 percent, said they have taken out more debts to cover reduced income. The remaining 9.7 percent said they have borrowed more to invest, and 8.9 percent to buy properties.

Eight out of 10 Koreans in their 40s, or 78.2 percent, have stocks, bonds or funds in their investment portfolio. More than half of 57.4 percent said they will expand financial investments. Around 60 percent of non-investors said they are willing to begin investing if they have more assets, time or information.

By Kim Yoo-shin and Choi Mira